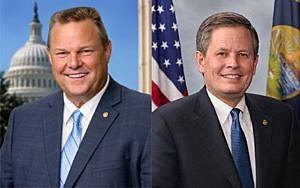 While President Donald Trump looks to lower the cost of prescription drugs, Montana’s two U.S. senators are pushing the Centers for Medicare and Medicaid Services to increase the transparency of drug costs for seniors.

In a letter to CMS Administrator Seema Verma this week, Sens. Jon Tester and Steve Daines voiced concerns over policies that allow pharmacy benefit managers to impose retroactive fees, which they say threaten rural pharmacies and take money out of the pockets of Montana’s seniors.

“We have heard from numerous pharmacies in our communities – many of which are rural or medically underserved – that these fees cause so much uncertainty that they don’t know if they can continue to serve American families,” the senators wrote. “This sort of opacity in the real cost of prescription drugs is exactly why Americans are so frustrated.”

Tester introduced a bill last July that looked to lower prescription dug costs by bringing more transparency to the pharmaceutical industry. Among other things, it would force drug companies to publicly disclose information regarding price increases on a prescribed drug.

This week, Tester and Daines urged Verma to adopt a proposal that would prohibit the retroactive fees and instead create certainty with drug prices by including price changes in the cost of the drug when it’s sold.

They said benefit managers are currently allowed to come back to pharmacies after a drug is sold and pay less for it than was originally expected. Seniors are left paying more out of their own pockets as a result, because the real price of the drug ends up being different than the price they paid.

“Seniors should no longer have to bear the burden of artificially inflated drug prices when they go to the pharmacy counter,” the senators wrote. “This proposal will help reduce the financial strain on seniors with fixed incomes.”

CMS estimates that the proposal could save Medicare beneficiaries over $10 billion in lower cost-sharing for prescription drugs. The measure has the support of the National Community Pharmacists Association and has won other sponsors in Congress.

In his State of the Union address this week, Trump also pledged to reduce the cost of prescription drugs, saying “prices will come down substantially.”

“One of my greatest priorities is to reduce the price of prescription drugs,” he said. “In many other countries, these drugs cost far less than what we pay in the United States.”