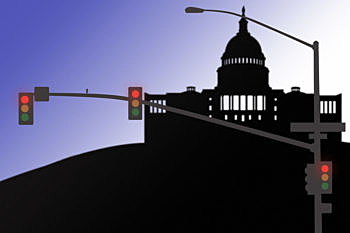 With the clock ticking on the current stop-gap bill that funds the federal government through Feb. 8, Congress is steeling itself to consider another must-pass budget bill. And, once again, health care could be caught in the crosshairs.

During previous debates over government funding, it was the high-profile Children’s Health Insurance Program that went months without reauthorization and became a bargaining chip in January. That program has since been extended for six years.

But the future of a host of other programs remains unsettled. Among them, funding for the nation’s 1,400 community health centers and a delay on capping Medicare coverage of physical and outpatient therapy.

“Fully 10 percent of the citizens of Montana depend on community health centers for access to their health care,” Sen. Jon Tester, D-Montana, said Friday. “It is, in some cases, the only source of heath care for these folks.”

The specific provisions behind these initiatives expired last fall. Advocates now are pressing lawmakers to keep them operational by including language in the broader spending bill that must pass next week to prevent another government shutdown.

Some of the items in this eclectic legislative mix are often left to the last minute to catch a ride on another bill — known as “extenders” by Washington insiders, because they extend funding that is set to expire or delay funding cuts that would otherwise take effect.

On the surface, these efforts may sound like wonky, inside-the-Beltway machinations, but program advocates say they have real-life implications for many of the nation’s neediest patients. For them, the congressional delay is causing concern. Here are some things you should know:

The provisions are important and wide-ranging

Another provision forestalls planned reductions put in place by the Affordable Care Act — in federal funds given to particularly vulnerable hospitals that serve a particularly high rate of low-income patients, known as Disproportionate Share Hospitals.

And yet another would prevent limits, put in place by earlier budget bills, from being applied to Medicare’s coverage of physical therapy, outpatient therapy and speech-language pathology treatment. Without action, coverage would be cut off after $2,010 of occupational therapy is provided and another $2,010 for the combination of physical therapy and speech-language pathology. Each limit would translate into Medicare reimbursement for fewer than 20 visits.

OK, so why hasn’t Congress acted on these yet?

These are generally smaller programs that, in the past, were authorized or extended via provisions attached to larger, must-pass bills. One of the favorite vehicles was the “doc fix,” which regularly moved through Congress to make adjustments in how Medicare paid doctors. That is, until a landmark 2015 law — the Medicare Access and CHIP Reauthorization Act, or MACRA — permanently addressed physician payment.

CHIP finally got funding in the Jan. 22 federal spending deal, but the other items were left on the table. One issue, many said: They’re simply not as sexy, and the impact is harder to spot immediately.

“The problem is too much of the focus was on just one egg in the basket, and that egg got done. Now the rest of the eggs are saying, ‘What about me?’” said Rodney Whitlock, a health policy consultant and former Republican Senate staffer. “The real-world impact of not addressing those is slowly becoming problematic.”

Most of the programs aren’t politically controversial

These programs usually pass with bipartisan support. For lobbyists and policy analysts on both sides of the aisle, that makes the funding lapse especially disorienting.

“Even things that should be easy and bipartisan are taking much, much longer and encountering much more difficulty than I think any of us would have expected,” said Eliot Fishman, senior director of health policy at the liberal advocacy group Families USA and a former member of the Obama administration. “It’s clearly a matter of political gamesmanship.”

There is some room to debate how to pay for these initiatives. But even that is limited, suggested Thomas Miller, a resident fellow at the conservative American Enterprise Institute.

“If it’s your economic interest at stake … this is an end-all and be-all. But these are not gigantic items — the consequences for the larger fiscal picture are not immense,” Miller said.

Take the therapy caps. They were first put in place as part of the 1997 Balanced Budget Act, as part of an effort to curb Medicare outpatient spending.

But in 1999, right when the caps were scheduled to kick in, pushback from physicians and patient advocates led Congress to delay their effective date. Since then, Congress, has — except for a brief lapse — kept them at bay.

This delay in funding has consequences for patients

Stephanie Weyrauch, a Minnesota-based physical therapist concerned about the therapy caps, said she and her colleagues are already starting to ration care.

She described, for instance, a 69-year-old man who is recovering from a stroke and about halfway through his allotted therapy. He will require several more sessions later this year just for that condition, which would bring him up to the cap. If his other ailments — shoulder problems and poor blood flow – worsen, Medicare wouldn’t cover treatment.

“We have to make sure we’re doing what’s best for our patients. Sometimes that means we stop therapy early to prepare for a potential next episode,” she said.

A fix from Congress could come next week

Congress already provided some short-term funding for community health centers, which is “keeping the lights on,” Fishman said. But it lasts only until the end of March.

And the Maternal, Infant and Early Childhood Home Visiting Program is operating on previously allocated dollars.

In the meantime, the affected programs are struggling to plan for the future, Fishman noted. They are trying to come up with budgets and make staffing decisions without a sense of what their income will actually be.

But some people expressed optimism about what will be included in the funding bill likely to take shape in Congress next week.

“I continue to believe that when a spending deal gets worked out this train will ride along. … It is an election year,” Whitlock said. “No matter what, this is one of those where it’s got to get worked out.”