Cries for change rose above the train whistles in downtown Missoula on Saturday as thousands of protesters filled the streets to call for gun reform, while vowing to throw lawmakers out of office if they continue to bow to the gun lobby.

The event, which coincided with March For Our Lives rallies across the country, marked the third such protest in Missoula over the past few weeks, though this time it came with terse warnings to Montana’s state and federal lawmakers.

Regardless of party affiliation, enough is enough, the marchers proclaimed.

“The NRA buys our country’s politicians and has them vote to increase their profits and to continue the lack of background checks, to keep AR-15s legal, and ultimately perpetuate the murder in our schools,” said Missoula high school student Miles Luedecke.

“We are the next generation of this nation and we’ll be running the country,” he added. “If politicians are so corrupt as to take NRA blood money and perpetuate these shootings, then they will not be our politicians. We will vote them out.”

While the Florida students led a march on the White House, tens of thousands of others gathered in cities across the country to follow suit, including Missoula and Billings. 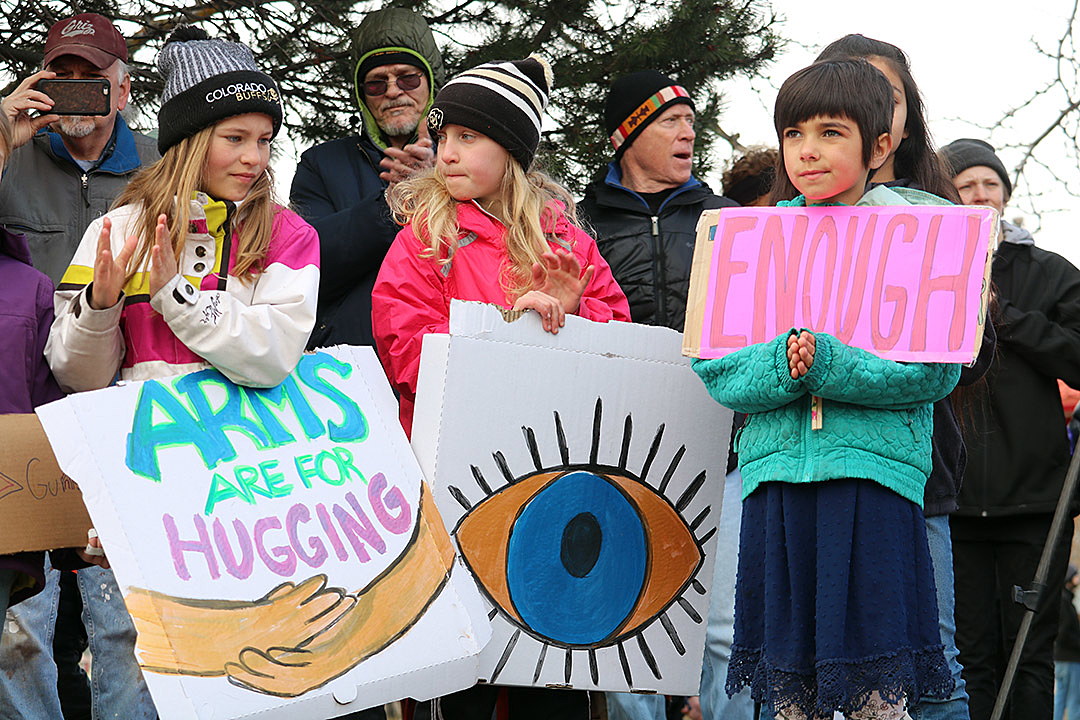 Change has already occurred in several states, including Washington and Florida. But little has been achieved at the national level, and nothing has happened in Montana.

The state’s congressional delegation has veered away from new gun measures to focus on other issues, such as mental health and school safety, and the governor’s office has been silent on the issue. For many of those present Saturday, that status-quo approach has grown stale.

“If we’re going to change gun laws, we need to change Congress, and we need to change our state Legislature,” said Missoula resident Nancy de Pastino. “If you don’t like what you see about a candidate or a sitting legislator, then throw them out.”

Five years ago, de Pastino organized the Montana chapter of Moms Demand Action for Gun Sense in America after a man fatally shot 20 children between 6 and 7 years old, along with six adult staff members, at Sandy Hook Elementary.

The local chapter of Moms Demand Action lobbied for background checks on all gun sales and purchases in Missoula in 2016 and saw the measure adopted by the City Council in September of that year. Four months later, however, Montana Attorney General Tim Fox overturned the ordinance, saying local governments were prohibited under state law from enforcing background checks.

The city never challenged the ruling and de Pastino, who is now running for the Legislature representing House District 91, plans to push for change at the state level if elected to office.

“I want to make progress, and I know that we can make progress and we need to end gun violence,” she said. “We need background checks on all gun sales. We need to keep guns out of the hands of domestic abusers. And we want a red-flag law so law enforcement can pull the guns of those who pose a threat to themselves or others.”

The students involved in Saturday’s rallies will reach voting age over the next few years, and they’ve taken note of the inaction in the nation’s capital – and in Helena.

Missoula elementary school student Salome Daniel stands among them. She recounted the day her school went on lockdown due to a nearby gunman, and the pride her fellow students felt when she organized a walkout earlier this year after the Parkland shooting.

“We walked out because adults haven’t been taking a stand,” she said. “Us kids feel that we need to start making our voices heard so adults realize there needs to be change. Lawmakers need to listen. It’s too easy to get access to guns.”