“To attain a bare majority, Democrats would likely have to win the national popular vote by nearly 11 points,” the new study by Brennan Center states.

“Neither Democrats nor Republicans have won by such an overwhelming margin in decades,” the 52-page report continues. “Even a strong blue wave would crash against a wall of gerrymandered maps.”

With more than seven months until Election Day to go, polling averages by FiveThirtyEight show Democrats with a roughly 6-point lead at the time of the report’s release.

The Brennan Center says Democrats would historically take an additional 27 seats with such a lead, enough to overtake House with a four-seat majority.

Using congressional maps in Pennsylvania, however, the Brennan Center found that an 11-point victory would win the Democrats only 28 seats.

“The situation would have been even worse for Democrats had the congressional map in Pennsylvania not been redrawn in early 2018 by the Pennsylvania Supreme Court,” the report notes, referring to the controversial step taken to address Republican gerrymandering. 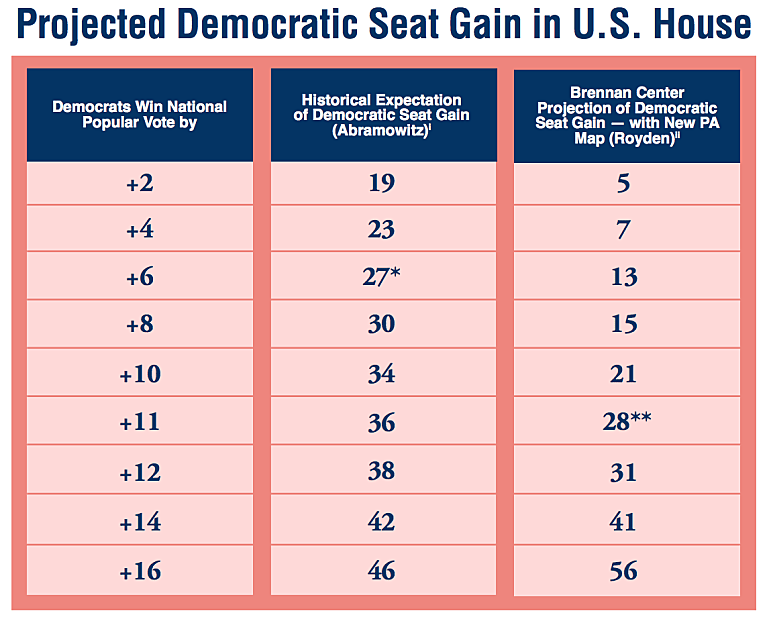 The U.S. Supreme Court is considering two cases determining the constitutionality of drawing district maps to benefit a political party, but the Brennan Center notes that even a favorable ruling would not likely come on time to affect results in November.

“As gerrymanders become ever more sophisticated, generic ballot leads no longer effectively predict how many seats a party might pick up,” the report notes. “Some state maps are carefully designed to withstand significant electoral swings while others respond more nimbly to shifting political preferences.”

The word gerrymandering takes its name from a voting map so contorted that it resembled a salamander, but Pennsylvania’s maps took this tradition to a new level.

The winner of a Washington Post write-in contest described one gerrymandered district in Pennsylvania as “Goofy kicking Donald Duck.”

Widely considered to be politically progressive, the nonpartisan Brennan Center said that Republicans should care about gerrymandering too.

“This decade, gerrymandering has helped Republicans,” the report states. “In the future, it may help Democrats. Although this report focuses on Democrats, its warnings apply with equal force to Republicans.”