The Missoula County Fairgrounds is asking the city for $1.1 million in tax increment financing to fund the extension of public trails across the property as part of its redevelopment efforts, which are expected to begin in the coming weeks.

While the fairgrounds isn’t currently located in a city urban renewal district, several members of the City Council on Wednesday expressed verbal support for the funding request, saying the trail system would serve as a boost to the Midtown district and connect isolated neighborhoods.

The Missoula Redevelopment Agency is expected to take up the funding request on Thursday, and MRA staff has recommended that the agency’s board of directors approve it.

The request includes both the design and construction of a new trail system, which would connect bicycle and pedestrian facilities outside and across the fairgrounds to better connect surrounding neighborhoods.

“We all had a reasonable expectation that there might be a request of MRA for funding to do the things we all said that we were interested in having happen,” said council member John DiBari. “There’s a tight nexus in what they’re asking for and what our vision has been to address what’s going on around the fairgrounds.” 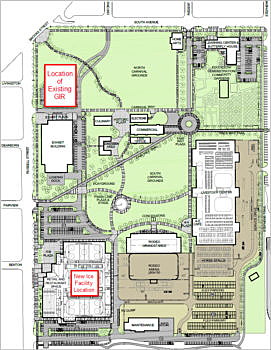 The fairgrounds has also asked the county to create a special district for the property to expedite plans for Phase 1 redevelopment, including renovations to historic buildings, utility work and site preparation for future projects.

Commissioners adopted a resolution last month stating their intent to create the district, a move that will enable the county to bond roughly $20 million and pay it back over a 20-year period using funding generated from three mills levied by commissioners last year.

The additional $1.1 million in tax increment financing sought by the fairgrounds from the city would be combined with the bonds issued to purchase a nearby city park. Those combined bonds would amount to roughly $5 million and would largely be tax exempt, though MRA believes the district has “more than adequate capacity to absorb the costs,” according to a city memo.

But several City Council members expressed opposition to the fairgrounds’ funding request, or hinted at deeper apprehensions. No vote was taken on the issue.

“One of the reasons why I oppose tax increment financing and MRA is because we have unelected officials making spending decisions,” said council member Jesse Ramos. “This is going to be money that comes out of folks’ disposable income that could have been used for any number of things.”

Advocates of an expanded trail system in and around the fairgrounds, however, have billed the project as a boon to the district, one that has attracted a growing level of private investment and now claims its own Missoula Midtown Association, similar to the Missoula Downtown Association.

With the county poised to spend tens of millions of dollars in public and private investment to redevelop the fairgrounds, the Midtown district could see a boost of its own once the property is turned around and made more welcoming, both in use and aesthetics.

“The potential for what we have here in the fairgrounds is going to be tremendous for the Midtown area,” said council member Heather Harp. “The role of government is not to make a profit, but to provide an opportunity for other businesses in our community.”

Jeremy Keene, one of he architects behind the trail and landscaping project, said the trail system is designed for non-motorized commuter traffic. As proposed, it would create new trail routes, both within and outside the fairgrounds, including connections to Playfair Park and along Russell Street and South Avenue.

Walkways within the fairgrounds would also aid in pedestrian circulation while wide sidewalks and boulevards are envisioned along the property’s boundaries.

“As this area develops and becomes more intense, the fairgrounds become this green oasis,” said Keene. “It’s this amenity that helps the Midtown become a more urban place because the fairgrounds provides that open space and amenities that can help support development in Midtown.”