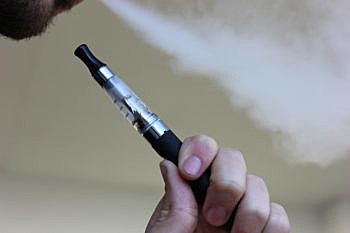 The City-County Health Department is asking Missoula County commissioners to adopt a recently passed city ordinance that bans vaping in indoor public places and gives business owners the right to restrict smoking within 25 feet of their doorway.

The City Council adopted the ordinance in March and the City-County Health Board recently followed suit. If commissioners do the same at a public hearing set for next month, it would permit Missoula Mayor John Engen to extend the modernized ordinance five miles beyond the city limits.

“Part of the law says the mayor can enforce the law five miles outside the city if it’s a health regulation and if it’s passed by both the health board and the county commission,” said Shannon Therriault, environmental health director at the City-County Health Department. “The health board has already passed it.”

Commissioners heard the request on Wednesday and didn’t reveal their thoughts on the issue, though they did ask if was possible to adopt the ordinance countywide and how the current proposal would be enforced.

Enforcing indoor violations of the vaping ban in public places within five miles of the city would fall upon the health department and the City Attorney’s Office, Therriault said.

“For indoor enforcement for vaping, that really parallels what’s in the Montana Clean Indoor Air Act,” she said. “The penalties are the same for the act, but ultimately it’s a violation of city ordinance, so it would go to the City Attorney’s Office through the health department. We worked with the County Attorney’s Office to make sure that’s okay.”

Enforcing outdoor violations is up to the restricting party and wouldn’t fall to the Missoula County Sheriff’s Office unless the violator refuses to leave the 25-foot radius of a business’s doorway, as defined by the ordinance.

“Mostly what we have found, if there’s a no smoking sign, people don’t smoke,” Therriault said. “We haven’t had huge problems with people smoking where there’s no smoking signs.”

After weeks of debate and additional work with the American Cancer Society, the City Council unanimously approved its modernized smoking ordinance back in March.

The ordinance defines an indoor public place as any building to which the public has or is permitted access. Smoking now covers alternative smoking devices that create aerosol or vapor, along with traditional cigarettes, cigars and marijuana.

The new ordinance also updates the definition of smoking and alternative smoking devices.

“Missoula is now the ninth local entity in Montana that has e-cigarettes included in its Clean Indoor Air Act,” said Kaila Warren. “We’re trying to capture the urban areas right outside of Missoula. With e-cigarettes on the rise, it’s really a precautionary measure.”

Missoula County commissioners are expected to consider the issue in early June.