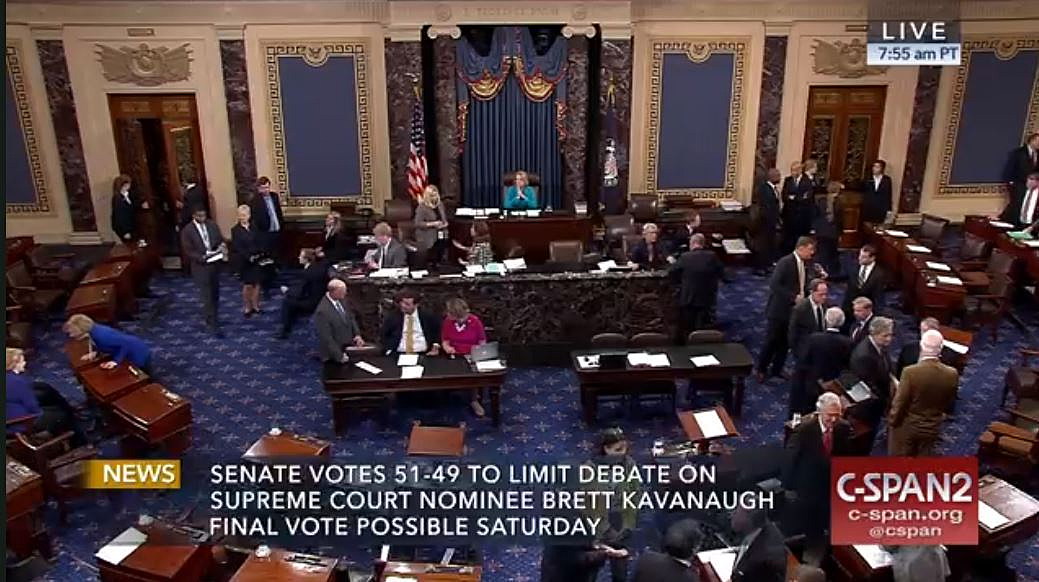 WASHINGTON (CN) – Supreme Court nominee Brett Kavanaugh cleared a key procedural hurdle in the Senate on Friday, signaling he has won the support of crucial senators who expressed reservations about his nomination after several women accused the judge of sexual misconduct.

The 51-49 vote on Friday morning does not confirm Kavanaugh, but absent several last-minute changes of heart, it all but assures the result of a confirmation vote expected to occur on Saturday afternoon.

Prior to the vote, Republican Sen. Susan Collins of Maine said she supported advancing Kavanaugh’s Supreme Court nomination in the procedural vote, but would not announce how she will vote on confirmation until Friday afternoon.

Collins is one of three Republicans seen as undecided on Kavanaugh’s nomination as the action got underway on Capitol Hill Friday morning.

Senator Chris Coons, a Delaware Democrat and close friend of Flake’s, told reporters shortly before the vote that Flake had not indicated to him whether he planned to vote to advance Kavanaugh’s nomination. While Flake’s public position on Kavanaugh has been somewhat unclear since the allegations became public, Coons noted he and the Arizona Republican have fundamentally different visions of the future of the court.

Kavanaugh’s confirmation once appeared to be effectively guaranteed, but that changed when Christine Blasey Ford came forward last month to accuse the longtime D.C. Circuit judge of forcing her into a bedroom, pinning her down and attempting to remove her clothes at a party when they were both in high school.

The next week, Deborah Ramirez, a classmate of Kavanaugh’s at Yale, came forward to accuse Kavanaugh of exposing his genitals to her without her consent at a drunken dorm room party.

Kavanaugh has repeatedly denied the allegations against him.

After Ford came forward, Republicans on the Judiciary Committee spent days negotiating back and forth with her attorneys to set a date for Ford and Kavanaugh to testify before the committee, while Democrats called on the FBI to conduct an investigation into the allegations against the judge.

The Judiciary Committee convened a hearing last week to hear from both Ford and Kavanaugh, in which Ford detailed her memories of the alleged assault. During his testimony, Kavanaugh gave fiery testimony in which he categorically denied the claims while also lambasting the committee’s handling of the allegations against him.

The committee reconvened the next day to vote on Kavanaugh and appeared poised to favorably report his nomination to the full Senate after Senator Flake announced he would be voting in favor shortly before the meeting.

But Flake spent the meeting consulting with Democrats on the committee, with senators shuttling in and out of a small room just off of the main hearing chamber and whispering to staff and other lawmakers.

When it came time to vote, Flake announced he would vote to favorably refer Kavanaugh’s nomination to the full Senate, but would not vote to confirm him without a short FBI investigation into the allegations. Senators Collins and Murkowski, R-Alaska, sided with Flake and the White House later the same day ordered an investigation limited to current allegations of sexual misconduct against the judge.

The FBI delivered the results of its investigation on Thursday and senators spent the day reviewing its contents in a secure room in the basement of the Capitol. Republicans emerged from the facility saying the investigation had turned up no additional evidence to corroborate the claims against Kavanaugh, while Democrats disputed this and said the investigation was too limited.

According to the Judiciary Committee, the FBI interviewed 10 people with “potential firsthand knowledge” of the accusations, and produced 12 reports that summarized their interviews. The report included six witnesses who shed light on Ford’s allegations and four with knowledge of Ramirez’s.

This included the three people Ford said were at the party where the alleged assault took place, as well as two people who were present at a July 1, 1982 gathering Kavanaugh noted in his diary-like calendar that some argued met Ford’s description of the party.

The agency did not interview Kavanaugh or Ford, but did interview Ramirez, according to the Judiciary Committee’s executive summary of the report.