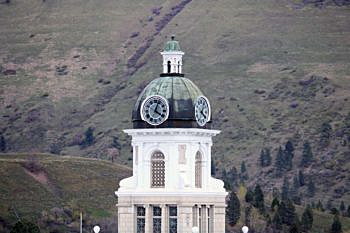 With the 2019 legislative session rapidly approaching, Missoula County commissioners have inked a contract with Northbound Public Affairs to lobby on the county’s behalf, and keep tabs on several hundreds bills and their potential impacts.

Commissioners approved the $18,400 contract last week. Coupled with its own internal team, the county has set its sights on a wide range of issues, particularly the state’s lack of reimbursement for mandatory services rendered in Missoula County.

“We’re doing work for the state and we’re entitled to be paid for it,” said Commissioner Jean Curtiss. “They monkey around with that all the time, acting like we’re just holding out our hand, but we’re not. It’s work we’re doing for them.”

Curtiss cited a range of examples where the county provides services for the state, from mental health care to expert witnesses in criminal prosecutions, such as last year’s double murder in which the suspects attempted to dissolve their victims in a tub of acid.

Commissioners said the state is obligated to pay for the expert witnesses needed for prosecution, though it cut its reimbursement during the last legislative session.

“The legislature can crow all it wants about how it’s tightening its belt,” said Commissioner Dave Strohmaier. “But ultimately, it balloons somewhere, and the expert witness is a great example. We’re not going to throttle back on what we have to do to prosecute cases, and we have to pay for it.”

Other examples aren’t hard to find, including the rate the state pays to hold state prisoners at the Missoula County Detention Facility. The legislature capped that rate at $69, though its contract with the county calls for an $89 reimbursement.

The difference costs Missoula County millions of dollars a year. That cost is passed on to local taxpayers, even as legislators boast about trimming the state budget, commissioners said.

“We have a contract with them to pay more than what they’re paying,” said Commissioner Cola Rowley. “They’re actually in breach of a contract with us. That’s something we’re working on pursuing, and that will defiantly be an issue in the next legislative session.”

Missoula County is also looking for legislation allowing it to reduce the speed limit on paved roads to less than 35 miles per hour. As it stands, commissioners said, the county can’t lower the speed limit, leaving county residents in urban areas frustrated.

“We generally follow 500 bills or so that can effect the counties,” Rowley said. “We have to really decide where we stand on stuff. Our lobbyist is our boots on the ground in Helena so they can have those conversations in person. They’re there and able to know our position and lobby for us.”

The outcome of the November election will determine Missoula County’s delegation at the Legislature. Once the election is over, commissioners plan to meet with the delegation to discuss the issues before the Legislature convenes in January.

Taxation is expected to be an issue as well.

“While the Legislature last session, especially, was patting itself on the back for cutting the state budget, a lot of the responsibilities got dumped on the county budget,” Curtiss said. “Our only method of increasing our revenue is increasing our property tax.”

Commissioners said the local delegation has been “very responsive” in making the Legislature understand the pressure that places on Missoula County taxpayers.

“I think they’re all hearing that, and so there might be a few proposals of what to do differently with property taxes and different taxing revenues,” Rowley said. “There may be good and bad things coming out that we may or may not support.”