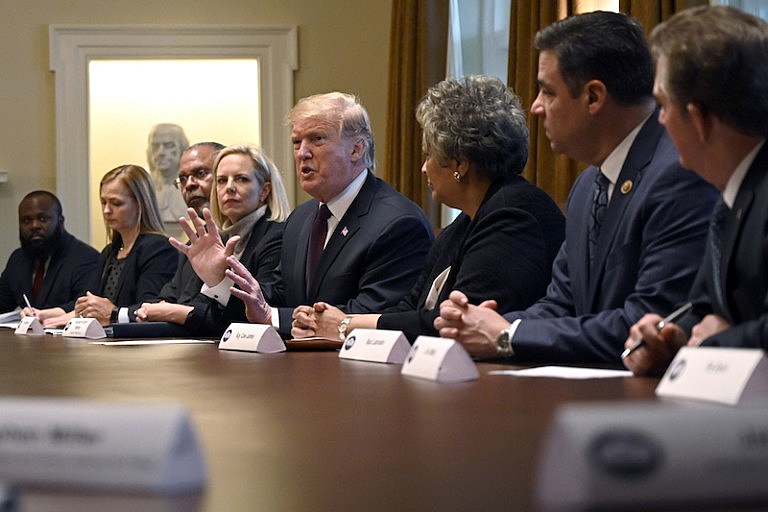 WASHINGTON (CN) – Tackling two plans to end the partial government shutdown, but falling short of a 60-vote threshold, the Senate failed Thursday to pass a Republican plan with $5.7 billion to fund a border wall and a competing Democratic proposal.

The votes were the first the Senate has taken to reopen the government since the shutdown began on Dec. 22, though their defeat had been all but assured before senators even made their way to the chamber.

In exchange for wall funding, the Republican plan offered temporary protections for certain groups of immigrants, including those who are in the country illegally having been brought here as children.

The bill also included changes to the asylum system, requiring minors in El Salvador, Guatemala and Honduras to apply for asylum in Central America rather than at the U.S. border.

President Donald Trump laid out the proposal in a speech over the weekend, and Senate Majority Leader Mitch McConnell said Thursday it is the only plan that will be able to reopen the government. McConnell has on multiple occasions blocked consideration of funding bills that passed the House, saying he will not bring up a bill that Trump will not sign.

“We all know the ground rules,” the Kentucky Republican said in a floor speech Thursday. “We need a compromise that can pass both chambers and earn the president’s signature and the first proposal we will vote on today is the only legislation that exists, period, with any chance of checking those boxes.”

Democrats roundly condemned the Trump-backed proposal, specifically objecting to the changes it would make to the asylum system. Senate Minority Leader Chuck Schumer said Thursday that Congress could override Trump’s veto and reopen the government on its own if Republicans joined with Democrats in passing a funding plan without border-wall money.

The plan from Democrats, which would have funded the government through Feb. 8 without providing Trump additional money for the border wall, ultimately earned support from six Republicans. Its 52-44 defeat still outdid the Republicans’ plan, which failed 50-47.

Over the past 34 days of the shutdown, negotiations between the White House and congressional leadership have stalled as Trump has insisted on receiving border-wall money in any plan to reopen the government, and Democrats have refused to fund the project.

Senators leaving the votes on Thursday afternoon were uncertain about their next steps in the shutdown fight. McConnell and Schumer are set to meet to discuss the subject later in the day, and Senator Richard Shelby, the Alabama Republican who chairs the Senate Appropriations Committee, said Thursday lawmakers will know more about how to proceed following that meeting.

“I don’t know what’s going to happen next, nobody knows,” Shelby told reporters Thursday. “I think what we’re all anticipating what might, might, come out of any conversation with Schumer and McConnell this afternoon. If nothing comes out of the meeting then we’re where we are today where we’re in a protracted standoff.”

Senator Brian Schatz, D-Hawaii, told reporters he believes Republicans appear to be softening on their opposition to reopening the government without border-wall funding.

“I think there’s an aperture,” Schatz said. “I don’t want to be overly optimistic and I think we’ve got to all manage our expectations and do some work, but Republicans seem to realize that this isn’t working for them and I think we need to end this as soon as we can.”

Senator Thom Tillis, R-N.C., said the Trump-backed proposal is a marker for what a future compromise might look like, calling the inclusion of an immigration reform package in the Republican proposal a “good first step.”

“Intuitively, I think what the president has proposed is where we’re going to end up,” Tillis told reporters Thursday. “That it’s going to be somewhere within the bounds of some mix of border security, probably some of it restricted for use with any sort of barriers, but some used for barriers, and then progress on immigration reform.”