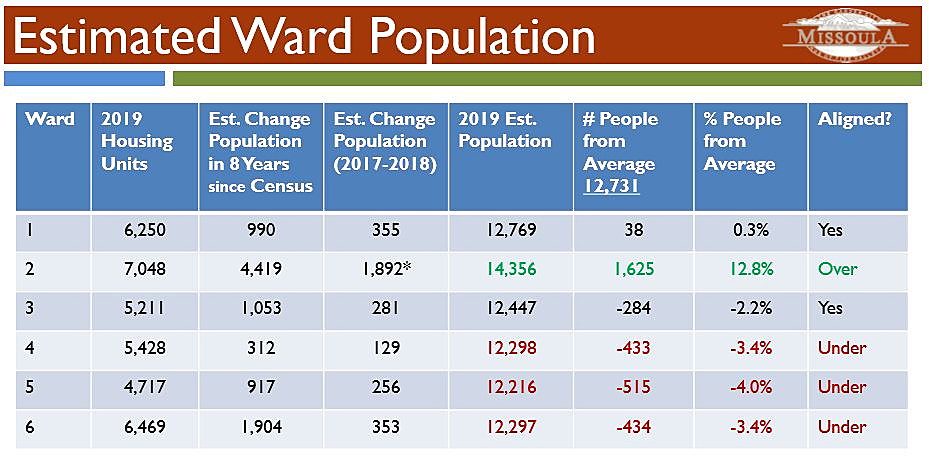 For the second time in two years, the Missoula City Council has approved a plan to redraw the boundaries of several voting districts, saying population shifts in some parts of the city now require the adjustment.

As a result, voters in portions of Wards 2, 4, 5 and 6 will fall under new representation, even if they didn’t vote for that council member in the last election. However, they will have the chance to do so in the 2020 election.

The changes take effect on April 17, if approved at the March 11 City Council meeting.

“Every 10 years, ward boundaries are adjusted as needed based on new census population data,” said Mike Haynes, director of Development Services. “In the interim years, they’re adjusted based on the building permits we’ve issued, and calculating new population estimates from that.”

Portions of Missoula have seem robust development in recent years, particularly areas of Ward 2. That includes Mullan Road west of Reserve Street, which has netted more than 4,400 new residents since the city last redrew its district boundaries in 2017, Haynes said.

Haynes placed Missoula’s estimated population at the end of last year at 76,383. Divided by the six city wards, the average population per ward should stand at roughly 12,731. Each ward should have no fewer than 12,349 residents and no more than 13,113, he said.

But at the end of 2018, Wards 4, 5 and 6 were below the minimum threshold while Ward 2, which includes areas west of Reserve Street, was well over the maximum threshold by more than 1,600 residents.

“There were a significant number of new units just west of Reserve on Mullan,” Haynes said. “There’s some pretty wide fluctuations between the number of new residential units that have come on line and the estimated new population between wards.”

To even out the ward populations, the City Council’s Committee of the Whole on Wednesday approved a recommendation to expand Ward 4 into Ward 5 by moving the boundary from Grant and 34th streets east to Paxson Avenue.

The adjustment will also expand Ward 5 into Ward 6 by moving the boundary closer to South Avenue. To reduce the population in Ward 2, the city will expand Ward 6 by expanding that district north of Mullan Road.

As in years past, the readjustment has drawn little public interest and even less feedback. One resident of Ward 6, however, asked the city to leave his district alone.

“There seems like a lot of play being done with Ward 6,” the man said. “It’s out of alignment right now, but when you start to play with boundaries, you start to affect how people associate with their neighborhood and with their ward representative. It seems like a ward that could benefit from some stability.”

In 2017, the city changed the boundaries of Wards 1, 2, 4 and 6. Three of those wards are being adjusted again based on recent population estimates.

“I’ve looked at the map a lot, and I would say we’re not isolating Ward 6 to play with it,” “said City Council President Bryan von Lossberg. “I’ve tried to see other ways, out of curiosity, how the wards could change, and I’m not seeing it.”