“Problematic is an understatement in terms of what it displays in terms of giving some hope, or I don’t know, some boost to what is and should be illegal activity,” Mueller said this afternoon in a nearly three-hour appearance before the House Intelligence Committee.

Earlier Wednesday, in a stint before the House Judiciary Committee, Mueller was more cautious in explaining his decision not to indict Trump on obstruction of justice.

Representative Jackie Speier, a California Democrat, wasted little time teasing out the former special counsel’s position on claims by both the president and some GOP lawmakers that the probe was a hoax.

“Absolutely, it was not a hoax,” Mueller said. “The indictments we returned on certain [entities] were substantial. What we have underplayed here is that aspect of our investigation. It had and will have long-term damage to the United States that we need to move quickly to address.”

House Judiciary Committee Chairman Jerry Nadler asked Mueller pointedly at the start of the morning session whether Mueller’s report exonerated Trump, a claim the president has made repeatedly.

“Is that what your report said? That it did not exonerate the president?” Nadler asked.

“That is correct, yes,” Mueller said.

Nadler also asked Mueller if he would be able to go public were he to have concluded that the president committed a crime of obstruction.

Mueller repeated a statement he offered in May.

“The statement would be that you would not indict because under the Office of Legal Counsel, a sitting president cannot be indicted,” Mueller said.

Mueller vaulted questions about the start of the FBI’s Russia investigation, which began months before his July 2017 appointment, but methodically outlined his probe’s key takeaways.

He said investigation did not establish that Trump campaign members conspired with the Russian government on election-interference activities, and he called out “a matter of critical importance” that members of the campaign were found to have obstructed the investigation and lied to investigators.

A onetime head of the FBI, Mueller labeled the Russian government’s effort to interfere in the 2016 election among the most serious challenges to democracy in America he has witnessed.

Democratic lawmakers drilled down on key obstruction findings illuminated in Mueller’s report, in particular, testimony from former White House counsel Don McGahn, over the course of more than 30 hours of interviews, that Trump pressured him to have Mueller fired.

“Is it fair to say the president tried to protect himself by asking staff to falsify records relevant to an ongoing investigation?” asked Representative Cedric Richmond of Louisiana.

Mueller called this an accurate summary and said he “believed it to be true” that Trump attempted to have McGahn create a false written record about the president’s concerns he was under an obstruction-of-justice inquiry.

While stoic throughout the hearing, Mueller appeared to lose his patience when Florida Republican Matt Gaetz slammed him as “uninterested” in prosecuting Christopher Steele, a former British spy who produced the now infamous dossier on Trump’s ties to Russia.

Repeatedly the former special counsel said questions over counterintelligence operations or pending investigations would have to be addressed to the FBI or Department of Justice.

What he did confirm was the considerable reach of the Russian disinformation campaign.

Mueller was unequivocal when asked Wednesday who stood to benefit the most from the torrent of Russian propaganda that reached at least 126 million people during 2016.

“Donald Trump,” Mueller said. “But there were instances where Hillary Clinton was subject to the same behavior.”

One name repeatedly referenced by Republicans on Wednesday was Joseph Mifsud, a Maltese professor who was in contact with George Papadopoulous, the former Trump campaign adviser whose lies to the FBI sent him to prison for 12 days last year.

Mifsud is described in the report as a man with considerable connections to the Kremlin. It says that, months before Russia’s hack of the Democratic National Committee became public, Mifsud told Papadopolous he could help the campaign through an “anonymous release” of dirt on Clinton.

This year, in online and in conservative circles, Papadopoulous has ginned up theories that Mifsud was actually a U.S. intelligence asset. 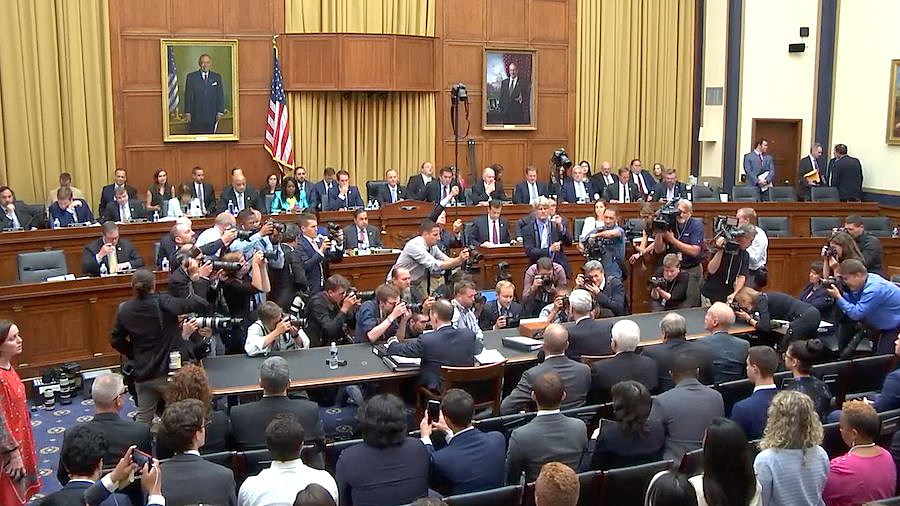 Another conspiracy theory brought to Mueller’s attention this morning session came from Representative Louie Gohmert. A Texas Republican, Gohmert asked Mueller if he ever ordered anyone to delete texts off government phones, a reference to messages that were critical of Trump, shared between former FBI agent Peter Strzok and FBI lawyer Lisa Page.

The Inspector General of the Justice Department studied the 19,000 messages that went missing from FBI records but ultimately concluded that a technical glitch was to blame. Each message was later recovered.

Mueller was clear in his response: It was not in his purview.

Ahead of and throughout today’s hearing, Trump lashed out at Mueller on Twitter.

“So Democrats and others can illegally fabricate a crime, try pinning it on a very innocent President, and when he fights back against this illegal and treasonous attack on our Country, they call it Obstruction,” Trump tweeted at 3:50 a.m. “Wrong! Why didn’t Robert Mueller investigate the investigators?”

The Trump 2020 campaign went on the defensive Wednesday as well.

“Robert Mueller confirmed what we already knew: no collusion, no obstruction and the way President Trump has been treated is unprecedented,” Trump’s campaign manager Brad Parscale said in an email blast.

Parscale bemoaned that Mueller’s $25 million investigation cost taxpayers “tens of millions,” but omitted the profit that the probe saw in seizing $46 million worth of assets from former Trump campaign chairman Paul Manafort.

Though the president had insisted this week he would not watch the hearing, his public schedule was cleared until 4 p.m. Among his tweets today, Trump asked why Mueller failed to investigate himself and others like former FBI Director James Comey.

Mueller interviewed Comey in 2017 for several hours. with a focus on notes Comey wrote for himself after each interaction with the president. After Trump fired Comey in May 2017, the president first claimed it was because of his handling of the email-server investigation into former Secretary of State Hillary Clinton.

Changing that story later, however, Trump told NBC’s Lester Holt he fired Comey because “this Russia thing with Trump and Russia is a made-up story.”

The president also expressed frustration Tuesday that Aaron Zebley, the special counsel’s deputy during the probe, will attend the hearing and provide advice to Mueller during the course of questioning.

“It was NEVER agreed that Robert Mueller could use one of his many Democrat Never Trumper lawyers to sit next to him and help him with his answers,” Trump tweeted. “This was specifically NOT agreed to and I would NEVER have agreed to it. The Greatest Witch Hunt in U.S. history, by far!”

Zebley’s attendance at the hearing was finalized late Tuesday, but Zebley’s spokesman Jim Popkin said the plan to have Zebley accompany Mueller was in the works more than a week ago.

Ahead of Mueller’s testimony, Politico/Morning Consult published a poll Wednesday that says more Democrats are now expressing skepticism of the report. Approximately 42% of Democrats and 42% of Republicans polled Wednesday both felt the investigation was handled unfairly.

On impeachment, according to the Fox poll, 42% of those surveyed said Trump should be impeached, compared with 45% who said he should not be.