(Montana Free Press) Just how hard do Montana cities, counties and school districts lean on residential property taxes to fund government services? Figures presented to lawmakers last month indicate the answer varies widely across different parts of the state, ranging from as low as $125 annually per capita in McCone County to as high as $15,794 per capita in Madison County.

The data was presented Jan. 13 by legislative researcher Megan Moore to a group of lawmakers and tax policy experts conducting an ongoing study into whether Montana’s tax system should be modernized to account for economic change.

The figures include value-based property taxes paid by residential property owners to municipalities, counties, and school districts. They exclude non-tax fees and assessments levied by local governments, which are difficult to tabulate across different jurisdictions.

Because high-end vacation homes like Yellowstone Club properties in Madison County can skew average figures, the per capita statistics don’t necessarily give a precise sense of how much typical Montana homeowners are paying. They do, however, indicate how much tax burden falls on property owners at a time when policymakers are pondering revenue reforms like a statewide sales tax.

The tax study, named a top priority for lawmakers in the interim between the 2019 and 2021 legislative sessions, was commissioned in part to explore whether state and local governments rely too heavily on residential property tax revenue.

Residential property tax collections have risen on a per capita basis faster than inflation over the past 16 years in 53 of Montana’s 56 counties, according to a Montana Free Press analysis of the tax study data. On average, Montanans paid $395 per capita in residential taxes in 2002, and $806 in 2018, an increase of more than 100%.

In comparison, inflation has driven U.S. consumer prices up by 40% over the same period, according to the U.S. Bureau of Labor Statistics. The U.S. Bureau of Economic Analysis says per capita income in Montana has risen 26% in that time. 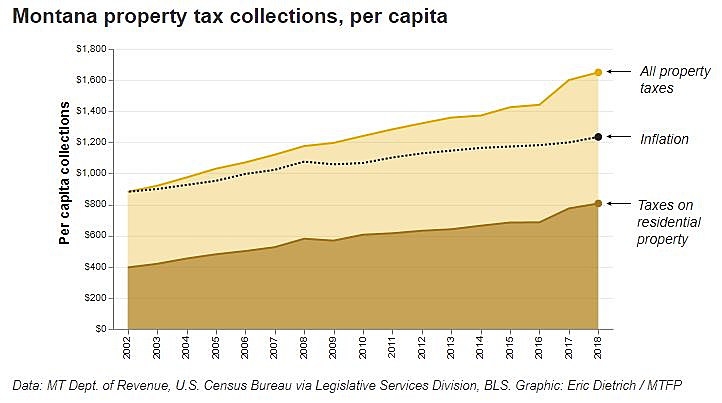 With Montana one of five U.S. states without a statewide sales tax, property taxes represent a key revenue stream for schools, law enforcement, fire departments, and other local government services. While some property taxes flow into the state general fund, a majority of state-level revenue comes from individual income taxes.

The amount levied in specific cities and counties depends on both the size of local government budgets and the composition of the local tax base. In places with a significant amount of valuable non-residential property — including industrial plants, large shopping centers, and oil pipelines — taxes assessed on that property can carry much of the weight for local government services. In jurisdictions with less non-residential tax base, more of the burden ends up on homeowners.

The total amount spent by local governments is a product of budgeting decisions made by elected county commissioners, town councillors, and school board members, as well as tax proposals approved directly by voters.

Montana state law nominally prevents local governments from ramping up property tax collections faster than one-half the rate of inflation, with an exception for tax collections from new development and voter-approved measures.

However, local governments routinely argue that the cap squeezes their budgets as their expenses rise with inflation, and often circumnavigate it by appealing to voters or adopting fees that aren’t technically classified as property taxes. The city of Bozeman, for example, created a special district to collect fees for street construction in 2015.

Local government leaders, however, increasingly worry that they’re asking property owners for too much, potentially setting themselves up for a tax revolt and ensuing budget turmoil.

“The only option to keep pace with service demands and infrastructure investment requirements is to ask the voters to voluntarily tax themselves for special projects through mill levies and bonded debt,” Montana Association of Counties Executive Director Eric Bryson said via email. “Property tax fatigue in conjunction with the requirement to continue asking voters for voluntary tax increases is an unsustainable system.”

As the tax study moves forward, one concern on policy makers’ minds is the shift toward internet-based retail, which means lost property tax revenue from brick and mortar stores as large retailers like Kmart and Shopko shut down in the face of competition from Amazon. Also part of the discussion is declining natural resource tax base, such as the estimated $4.5 million hit to property tax revenues coming with this year’s closure of Colstrip generating units 1 and 2.

Proponents argue that a sales tax could let Montana municipalities shift some tax burden to out-of-state tourists and allow local governments to relieve pressure on property owners without cutting budgets. But while some Montana resort towns currently collect resort taxes, efforts to float broader sales tax measures at the Montana Legislature have gone over like lead balloons in recent years, criticized by both tax-skeptic conservatives and liberals concerned that sales taxes fall disproportionately on lower-income Montanans.

As such, it isn’t clear whether lawmakers will develop legislation for the 2021 session as a result of the revenue study, particularly with control of the governor’s office depending on the outcome of the 2020 election.

“I’m not sure if we’ll get to a major overhaul this time, but I think we’re going to get a lot of data put together,” said Sen. Mark Blasdel, a Kalispell Republican serving on the study committee, at a Jan. 13 press briefing. 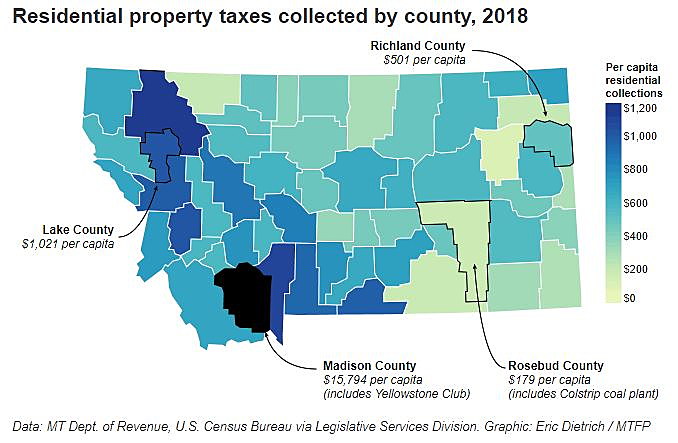 What does that data tell us? For starters, it’s that scenery-economy-heavy counties in Montana’s western mountains tend to lean particularly hard on their residential tax bases.

In Lake County, on the south side of Flathead Lake, for example, 81% of property tax collections came from residential properties in 2018, with residential collections totalling $1,021 per capita.

In contrast, residents of Rosebud County, where the Colstrip generating plant has provided a hefty industrial tax base for decades, pay some of the lowest property taxes in the state. In 2018, only 5.6% of property tax revenues in the county came from residential parcels, an amount totalling just $179 per capita.

In a more typical situation for the north-central and eastern Montana plains, Richland County taxpayers paid $501 per capita on residential properties in 2018. That figure was supplemented by $1,806 per capita of collections from other types of property.

Residents in urban counties typically pay more. In Yellowstone County, around Billings, residential taxpayers paid $711 per capita in 2018. In Gallatin County, around Bozeman, the figure was $1,094 per capita. In Missoula County it was $989. 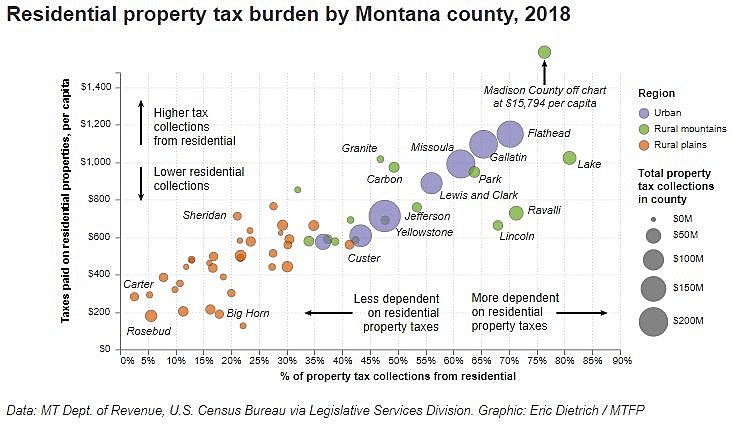 Madison County is an extreme outlier, having collected $15,974 in residential property taxes per capita in 2018.

Bob Story, executive director of the Montana Taxpayers Association and a study committee member, attributed that figure to high-end properties in the Yellowstone Club.

“They have a lot of property and not many people,” he said.

In the coming months, the study committee plans to dig into other portions of Montana’s tax system, particularly income and natural resource taxes. More information on the committee’s work, including briefing materials, is available at leg.mt.gov/committees/interim/2019rvic/hj-35-study-state-and-local-tax-policy.