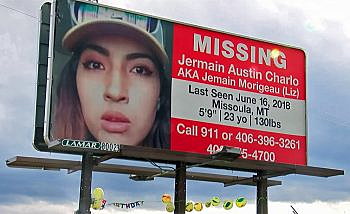 The proclamation won praise from the city’s Native population and rare standing applause from members of the council, who noted that American Indian women are 2.5 times more likely be sexually assaulted over the course of their life.

“One in three will be raped in her lifetime,” said council member Gwen Jones, reading from the proclamation. “A Native woman is more likely to die by homicide than illness. On some reservations, Native women and girls are murdered at more than 10 times the national average.”

Long a scourge to the Native community, the issue went unaddressed for years in larger society. But in recent years, efforts have been made to reverse the trend and increase awareness around the issue.

Last year, Sen. Jon Tester introduced a bill directing the federal government to review its response to such cases and recommend solutions on their findings. The year before, the U.S. Senate passed Savanna’s Act, requiring better reporting and data collection by law enforcement and a template for responding to such cases.

While that represented a positive step, Jen Harrington said on Monday, it still leaves gaps in the system.

“Because cases occurring in urban areas are not on federal jurisdiction, that means missing and murdered urban Native women, including Savanna herself, would not be included in the data the bill aims to collect,” she said. “Gaps like these allows violence to urban Native women and girls to continue.”

“The third leading cause of death among American Indian women is murder,” she said. “According to a study done by the Urban Indian Health Institute in 2016, the state’s with the highest number of MMIWG cases were Arizona with 54, Alaska with 52, California with 40 and Montana with 42.”

Unlike women of every other racial group, Native American women are more likely to be sexually assaulted by people who are not Native American. During the last Bakken production peak, reported attacks and sexual assaults of Native women increased.

“If you consider yourself a Montanan, then Native American history is part of your history – it’s part of all our history,” said Amber Schaffer. “Our current well being is part of everyone elses, and our future is the same. Keeping our sisters and daughters and mothers and aunties and grandmas safe is of utmost importance.”

For Missoula’s Native American community, the city’s proclamation brought welcome urban attention to the issue. Still, more must be done to reverse the statistics and keep current and future generations of indigenous women safe.

“It’s only a sliver of the recognition of the indignities that have happened to indigenous people on these lands,” Joseph Grady said of the proclamation. “We have to do more beyond just land acknowledgments, language and words. What we need is action in Indian Country and restored dignity to our people.”