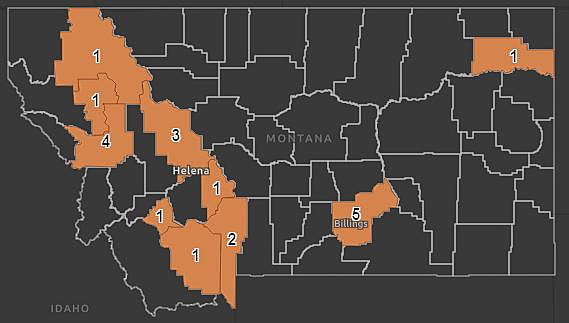 As testing reveals that Montana has more people with COVID-19 in more areas, the Bullock administration as taken a few more steps to protect health and reduce stress.

On Friday, Bullock issued a directive requiring the closure of a wide variety of public establishments statewide until March 27 to slow the spread of COVID-19. The directive affects restaurants, breweries and bars, health clubs and hot springs, casinos and theaters, nightclubs and bowling alleys.

Bullock said he didn’t make the decision lightly, knowing how it would affect Montana business owners.

Also on Friday, Gov. Steve Bullock announced that Montana would join the federal government in delaying the deadline for 2019 tax filing and payment until July 15. If Montanans are expecting a refund, they can still file early.

The establishment-closure directive extends for only one week but Bullock said he did that so the deadline coincides with the end of the directive that closed all K-12 schools.

Bullock warned that he’s likely to extend both directives, so he wanted them on the same timeline.

In the meantime, Bullock has directed school districts to come up with plans for remote learning and other services should he have to extend the closures. Districts whose plans are approved will continue to receive state funding and the lost instruction time won’t have to be made up later.

Bullock said he still hasn’t made a decision on whether to delay the June primary election.

“It’s been one week since the first confirmation of coronavirus, and there’s no doubt that our communities feel a lot different than they did just one week ago,” Bullock said. “But there are two ways we’re going to make it through all of this. Montanans are already engaging in both of those ways: first, preventative measures through social distancing and second, looking out for one other with our strong community ties.”

A number of counties, including Missoula County, had already put similar closures into effect, and Bullock said he considered making them statewide a day or so ago for uniformity. Then when the state Department of Public Health and Human Services announced a case of COVID-19 in a rural county – Roosevelt – on Wednesday evening, that sealed the deal. The Roosevelt County case was a woman in her 70s who had returned from traveling internationally.

That, and knowing that families would be returning to Montana from spring break, prompted Bullock to also issue a travel advisory on Thursday afternoon, asking those who traveled internationally to self-quarantine for 14 days and notify their county health department.

Bullock said he issued the advisory because the federal government hasn’t done a good job of informing travelers of the risk they pose. One man who was abroad didn’t receive any information before arriving in Montana, Bullock said.

“As we get positive cases that include both younger and older Montanans, and engages urban and now rural, I know that closure (directive) is imperative to protect our friends and neighbors,” Bullock said. “It really is up to all of us to prevent the spread of this virus. The sacrifices that we make now will help mitigate future action required to keep as many people as safe as possible.”

As of Thursday afternoon, Montana had 15 positive cases, including three people in their 20s in Gallatin County. On Friday, two cases were added: a woman in her 50s in Madison County and a man in his 30s in Lewis and Clark County.

Knowing there’s a national shortage of medical supplies and equipment, Bullock said the state is doing what it can to protect health care professionals by requesting equipment from the federal government and dipping into its own reserves. One problem is when the state tries to buy things from private suppliers, those suppliers are often selling everything to the federal government, Bullock said. Plus, large hospitals have their own supply chains.

“Every single day, we’re doing assessments of how much (personal protection equipment), as an example, that we have and what the supply chains are to get more,” Bullock said. “It’s certainly dynamic.”

This weekend, DPHHS will be distributing more personal protective equipment from state and federal stockpiles to hospitals and clinics around the state. On Saturday, the state is expecting a shipment of N-95 respirator masks and more swabs needed for the COVID-19 tests from the federal government.

Bullock estimated that about 16,000 new masks would be distributed from the state stockpile to health care facilities and first responders statewide.

Bullock said Montana hasn’t run out of tests yet. As of Thursday night, about 950 people have been tested.

“We’re ahead of the game in a lot of ways because of learning from our colleagues that are in other cities around the country and even around the world. So there’s a lot in place,” Gregory said. “Our first goal though is not to have the virus here at all.”