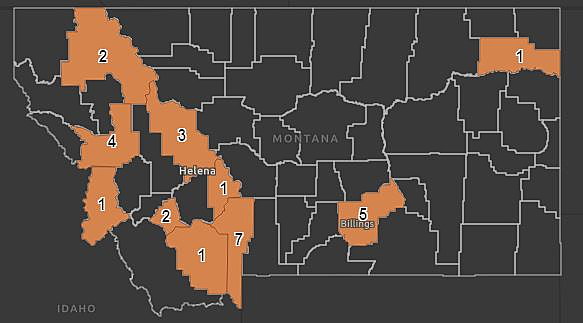 The number of positive COVID-19 cases across Montana climbed to 34 on Sunday, and most of the state remained shut down as officials work to stem the spread of the virus.

Montana’s congressional delegation on Saturday also worked to handle a number of outlying concerns, including an effort to bring Montanans home who are stuck abroad, and to ensure impacted counties had the resources needed to address the pandemic.

Among them, Sen. Steve Daines said he’d been able to get Isaac Sturgeon of Dillon home from Morocco early Saturday morning, though others who have reached out to his office remain stuck in foreign counties as the pandemic spreads worldwide and airlines cut service.

They include Butte pastor Mark Arbaough and three other Montana Tech students who are stuck in Lima, Peru, and Bozeman resident Necia Erickson, who remains in Cusco, Peru.

Both Daines and Sen. Jon Tester on Saturday also said all 56 Montana counties had qualified for economic assistance for an emergency declaration.

Outside a few urban counties, most other Montana counties had hesitated or outright resisted implementing strict measures to protect public health as the virus spread across the state. Gov. Steve Bullock on Friday made certain closures, including bars, restaurants and casinos, a statewide mandate.

“Small businesses are the backbone of our rural communities and the lifeblood of our state, so we’ve got to make sure they have the resources they need to keep the wolf away from the door,” Tester said. “I’m going to keep fighting to make sure Washington doesn’t leave rural America behind in the face of this outbreak.”

On the issue, Daines said “This is about giving our counties and working Montanans additional tools for relief they need during the Coronavirus outbreak. I will continue fighting for more relief and certainty for all Montanans.”

As of Sunday night, Gallatin County had confirmed 1o cases of the virus, followed by Yellowstone County at six. Missoula County remained at four, and public health officials there said they have not seen any evidence of community spread.

Several other counties had multiple cases, including Lewis and Clark, Silver-Bow and Flathead County, where a Flathead Beacon reporter Tweeted that a local county health-board member had opposed measures to close certain establishments, suggesting the virus was “no more dangerous than influenza.”