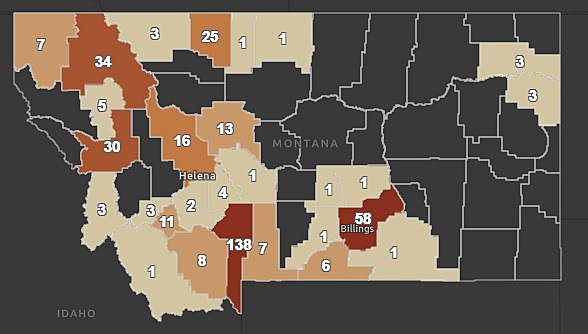 The number of coronavirus in Missoula climbed to 30 on Sunday, with four new patients testing positive for the disease over the weekend. The statewide total jumped to 387 after the state released the latest round of results.

Three new patients in Missoula were identified Saturday only as two women in their 20s and a third woman in her 60s. The patient on Sunday was also a woman in her 60s. One Missoula patient has died, and health officials believe the virus is more widespread than figures suggest.

“When a case in confirmed in the county, public health nurses get to work immediately to touch base with close contacts of the person who has that case,” said Missoula Mayor John Engen. “The health department continues to work closely with hospitals. One of the critical missions here is to make sure those hospitals aren’t overrun.”

According to the state, 169 Montana residents have recovered from COVID-19 and 47 people have been hospitalized, including 22 who are still under care. More than 8,900 tests have been completed, and six people in Montana have died as a result of the virus.

Gov. Steve Bullock’s orders closing certain businesses and public schools, along with the stay-at-home directive, has been extended until April 24.

Those directives could be extended again, Bullock has said, and last week, the Missoula City-County Health Department opened a drive-thru test center in anticipation of a prolonged pandemic and the likelihood that health officials will be able to test more people.

“Or county staff has been working on this, our finance department, to recalibrate out county budget and basically turn on a dime to find any resources necessary or available to support these efforts and our emergency operations center,” said Missoula County Commissioner Juanita Vero.