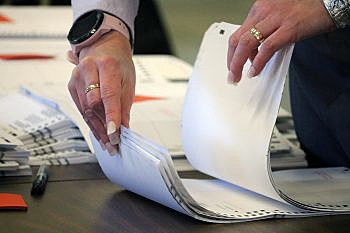 On Friday, election offices around Montana began sending out ballots for the June primary election, as they do every two years. However, there was a big difference this year: Mail ballots weren’t going just to those who asked for them, but to all active registered voters.

In March, Gov. Steve Bullock directed that counties could decide to hold the primary election by mail, to reduce the risk of spreading COVID-19. All 56 counties took that option. That means traditional local polling places will not be open, though people will be able to vote in person at county election offices.

Election officials estimate about 600,000 ballots were mailed out across the state on Friday. About 94,000 more registered voters are considered “inactive,” and will need to contact officials in order to receive a ballot.

In Lewis and Clark County, about 40,500 active voters are having ballots mailed to them. Audrey McCue, the county’s elections supervisor, said they have usually had 50% to 60% of their voters request absentee ballots, so it was not as big of a change as it might have been.

“That number has gone up, but it’s not a drastic increase for us,” she said.

For the vast majority of voters, the mail packet they receive will include three individual party ballots – Democratic, Republican and Green. Some voters, including in Missoula County’s Montana Senate District 45, will also get a Libertarian ballot.

Voters can choose one, and only one, ballot to vote. Once they’re done, they put that ballot back in the secrecy and return envelopes, sign the envelope and mail it back. The other two ballots can be discarded.

If a voter sends in two ballots that have been voted, neither one will be counted.

McCue said, in previous elections, mail ballot packets also included a separate envelope that people could use to send back their unvoted ballots.

“You didn’t have to send them back, but it gave you somewhere to put them and to send them back,” she said. “That law was changed last year, so now we’re not sending out that envelope, and voters aren’t required or instructed to return them.”

Bullock’s directive also said that any county that switched to mail ballots needed to ensure voters would not have to add postage to send their ballot in. Each county has chosen its own way to provide postage. In Lewis and Clark County, officials simply put stamps on each return envelope.

“In other counties, you might see ‘business reply mail’ on the envelopes, or you might see metered postage in the top right corner, but statewide postage is covered on those return envelopes, and voters don’t need stamps,” McCue said.

“Business for us is as usual; we’re still here,” said McCue. “If you don’t get a ballot, call us or come in person; we’ll be here.”

In a release, the Montana Association of Clerks and Recorders said voters should contact their local election administrator if they don’t receive their mail ballots by May 13.