(CN) — Generation Z is the most racially and ethnically diverse generation the United States has ever seen, with decidedly progressive political leanings, the Pew Research Center reported Thursday.

The study by Kim Parker and Ruth Igielnik emphasizes that 1 in 4 members of Gen Z,  whose members were born after 1996, are Latino. Just over half are white, while 14% are black, 6% are Asian, and 5% are another race or biracial. Nearly a quarter — 22% — have at least one immigrant parent, and 44% of those age 7 to 17 lived with at least one parent who held a bachelor’s degree last year. About one-third of Gen Zers live in a single-parent household.

“We do know, with regard to their views on race, that this is the most racially and ethnically diverse generation we’ve ever seen,” Parker said in a telephone interview. “So you could assume that some of the contexts in which they’re growing up, and the world around them, their peers, might have some influence on the way that they approach issues like race.”

About two-thirds of Gen Z and Millennials (born from 1981 to 1996) think black Americans are treated less fairly than whites, including a 43% of Gen Z Republicans.

The oldest Gen Zers turn 23 this year, and 24 million of them will be eligible to vote in the November 2020 presidential election, comprising 1 in 10 eligible voters.

Similar to Millennials in their views, Gen Zers tend to be progressive and pro-government and see racial and ethnic diversity as a good thing, the report found. They’re less likely than older generations to see the United States as superior to all other nations.

“It was really interesting to see how similar they are in terms of the way they approach the role of government and some of the key policy issues out there, like race and climate,” Parker said of Gen Z and Millennials. 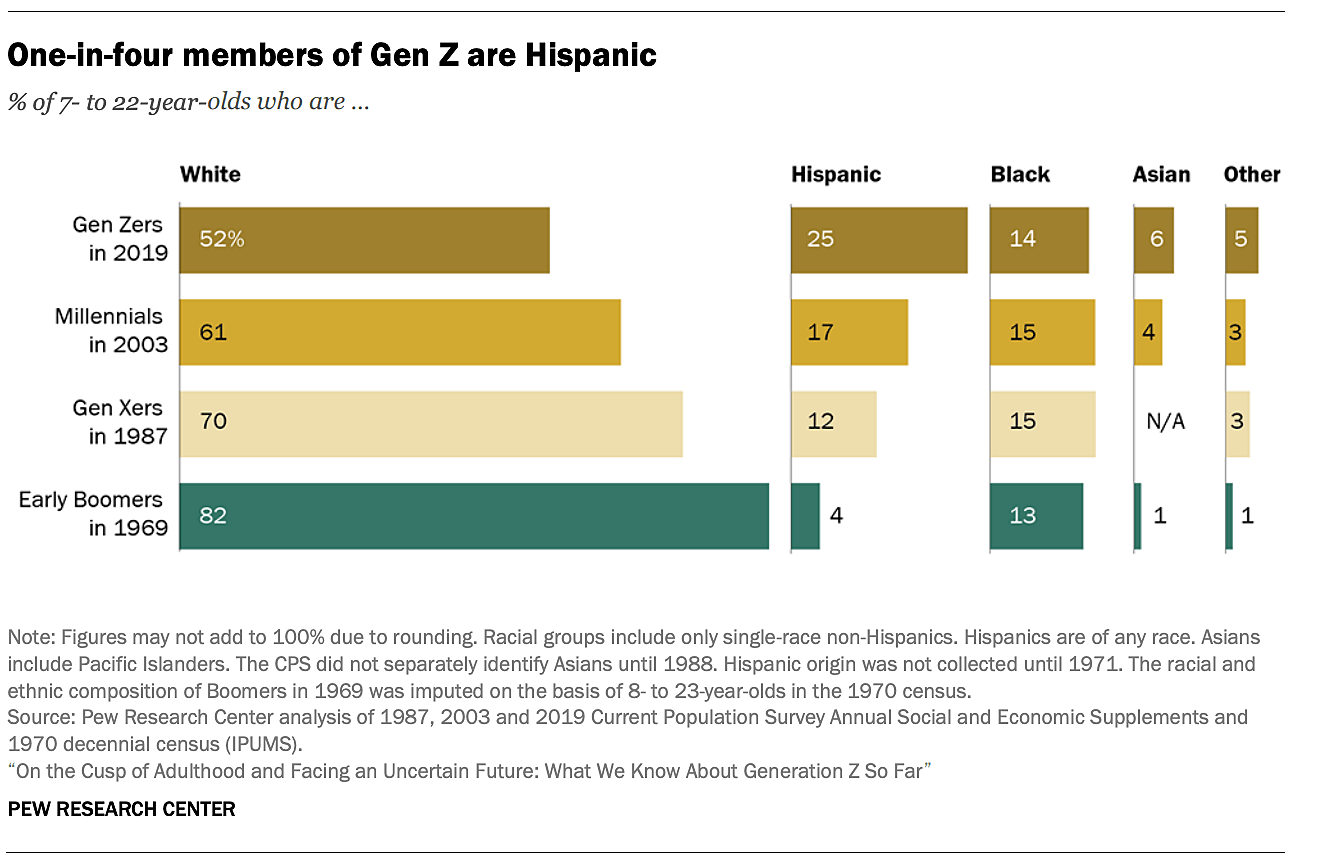 A majority of Gen Z and Millennials are likely to say the Earth is warming due to human activity. In a separate Pew Research survey in January, the group found Gen Z was far more likely than other generations to say climate change is a “very big” problem in the country — 69% of Gen Zers compared to just 53% of Millennials and 42% of Gen X (born 1965 to 1980).

Nearly half of Gen Zers and Millennials say gay marriage is a good thing for society, a sentiment shared by only one-third of Gen Xers and a quarter of Baby Boomers. More than one-third said they know someone who uses gender-neutral pronouns, compared to a quarter of Millennials. Six in ten 10 said online profiles and forms should include more gender options than simply male and female.

“I think that also speaks to the context in which they’re coming of age and the fact that these issues are much more out there; they’re experiencing them in school, and it’s just more part of the culture that they’re growing up in,” Parker said.

Just 22% of registered Gen Z voters approve of President Trump, the study found, compared with 32% of Millennials, 42% of Gen X, 48% of Baby Boomers and 57% of the Silent Generation.

Seventy-seven percent of Gen Z voters flat-out disapprove of Trump, the report found. A January survey found 61% of Gen Zers would probably or definitely vote for the Democratic nominee in the 2020 presidential election, while just 22% said they would vote for Trump.

Gen Z, which until a few months ago was expected to enter a prosperous world with low unemployment and a booming economy, now faces uncertainty as the Covid-19 pandemic ravages the United States and the world. Young workers are particularly vulnerable to job loss as a result of the pandemic, as they tend to work in the service industry.

Half of the oldest Gen Zers, ages 18-23, reported that someone in their household had lost a job or taken a pay cut as a result of the pandemic, more than Millennials, Gen Xers, and Baby Boomers.

Much of the Pew research was conducted before the Covid-19 pandemic hit the United States, Parker said, and there are a lot of uncertainties about how their college careers will pan out, given social distancing measures and the crashing economy. Of 18- to 21-year-olds no longer in high school in 2018, 57% said they were attending a two- or four-year college, an uptick from 52% of Millennials at the same age.

Many Millennials, many of whom came of age in the Great Recession, stayed in school longer to try to ride it out, Parker said. “But it’s a different proposition now if school doesn’t look the same as it did before.”

Generation Z members are so-called “digital natives,” having little to no memory of a world without smartphones, the report found, and 95% of them have access to one. Forty-five percent of 13- to 17-year-olds reported being online “almost constantly.” YouTube is the preferred social media platform, followed by Instagram and Snapchat.