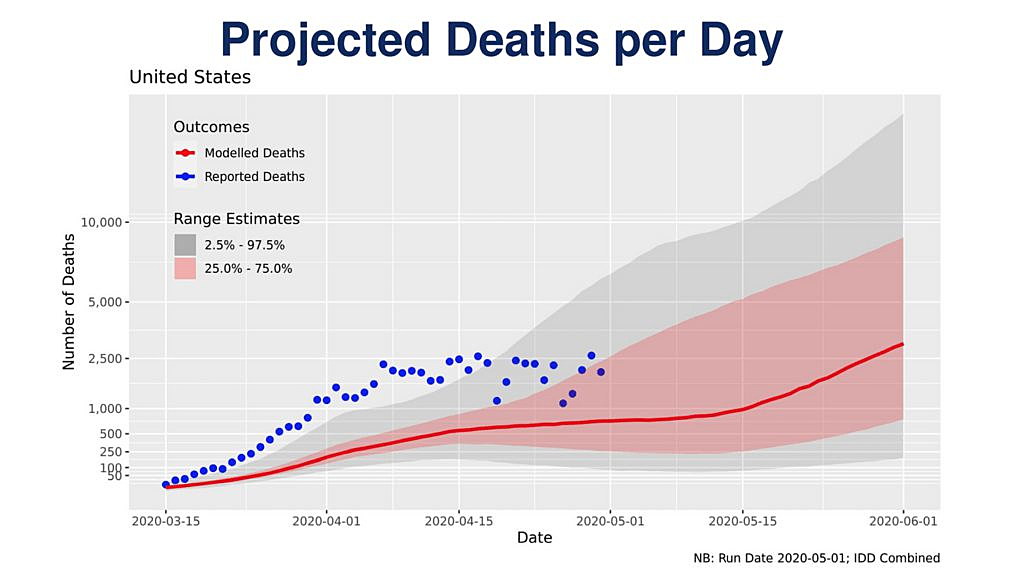 WASHINGTON (CN) — Roughly twice as many people will die of Covid-19 every day in the United States by this time next month, the Trump administration is projecting, according to modeling made public Monday.

Daily deaths from Covid-19 in the United States have been hovering between 1,000 and 2,500 for weeks, after more than a month of lockdowns aimed at slowing the spread of the virus. Predicting that the number will rise to 3,000 fatalities a day in early June, the situation update bearing logo of the Department of Homeland Security comes at a time when states are beginning to relax physical-distancing measures and reopen more recreational businesses such as hair salons and movie theaters.

First obtained this morning by The New York Times, the report shows that the actual number of deaths have generally outpaced the projections since the start of the outbreak. In addition to Homeland Security, the logo of the Federal Emergency Management Agency appears on the report.

President Donald Trump had previously suggested that Covid-19 deaths would top out at roughly 60,000 in the United States, but a case tracker from Johns Hopkins University shows that more than 67,000 people die of Covid-19 as of Monday morning.

The outdated projections relied on modeling from the Institute for Health Metrics and Evaluations that now projects more than 72,000 deaths in the most recent update.

Trump acknowledged the death toll could climb to 100,000 on Sunday night in a virtual town hall on Fox News.

“That’s a horrible thing,” Trump said. “We shouldn’t lose one person over this.”

The CDC report shows a downward trend in how many tests come back positive in New York and New Jersey, two of the hardest-hit states in the nation. Fewer positive tests are also anticipated in Florida and Georgia, which are among the first states to end lockdown measurements.

A spokeswoman for the Federal Emergency Management Agency did not respond to a request for comment on the documents, which bear the agency’s seal.

Though some of the data in the documents is credited to the Centers for Disease Control and Prevention, but a spokeswoman for the agency said the modeling on death counts and cases is not attributable to the agency.