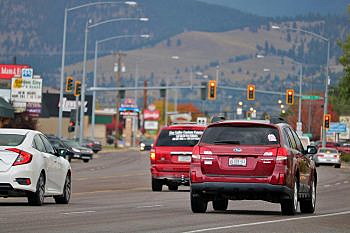 The Missoula City Council on Wednesday approved separate assessments for parks and roads totaling $7.6 million to pay for upkeep and maintenance.

Opponents of the increase said assessments within the districts have climbed exponentially since they were created 10 years ago, representing a jump of around 1,500%. While the general fund budget saw no tax increase this fiscal year, supporters of the assessments said the increases are needed to meet public demands.

During Wednesday’s special session, Mayor John Engen said the increases follow a shift to move costs away from the general fund and follows the traditional use of such districts in many cities across Montana.

He said that even with the road district’s funding increase and Missoula County’s gas tax, the revenue does “not even come close” to meeting the needs of Missoula’s transportation and maintenance needs.

“When you campaign on the notion of better streets, one of the ways you get those is that you spend money on them,” Engen said. “If you also look at the general fund you will see that, again, those public safety enterprises which we rely on have no protection without these special districts.”

The districts were created in response to restrictive rules adopted by the Legislature regarding property tax increases for the general fund. Ramos said that while the districts are an understandable way of handling such needs, seeing these continual increases is concerning.

“This has gone just incredibly high and this is what I think a lot of folks, particularly libertarians, fear about government having unfettered control to raise taxes and to raise increases within certain districts without that cap that the Legislature sets.”

“We still as Missoula, despite being the most progressive city in the state, have the median in terms of what we generate, in terms of revenue per property,” Harp said. “It speaks volumes that with the limited amount of resources that we do have, we are able to disperse those funds throughout all the community for all the various different public needs. From time to time I scratch my head as to what we could do differently.”

The council approved other assessments during the meeting.

The council also approved 9-3 a nightly $2 tax per hotel room in Missoula city limits with Contos, Ramos and Vasecka dissenting. The tax goes to the Missoula Tourism Business Improvement District.

Ramos said that bigger hotels benefit from this more than the “little guy getting squeezed out of the market.”

“I understand it’s the customer who pays the fee, but nonetheless it still impacts the business,” Ramos said. “It still hurts them through admin overhead and through various differences in the market. I get that it can help tourism, but at the same time the type of tourism it promotes isn’t the type that helps small hotels.”

Council member Stacie Anderson said most hotel guests won’t stop to consider the tax since most states have a sales tax.

“A $2 fee would be much less than anything anyone would be paying that has a sales tax on their additional hotel night, and the fact that this goes to help spur our local economy is a good thing,” Anderson said.

The council also approved taxes for property owners who had the city remove snow on the sidewalk and for hazardous vegetation removal. The taxes are a reimbursement to the city.