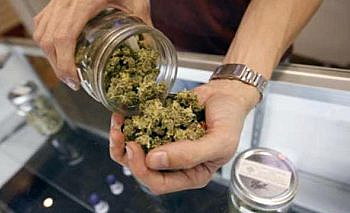 When voters decide whether to legalize marijuana for recreational use this November, it could pit those who believe in freedom of choice and see a potential windfall in tax revenue against others who fear a spike in crime and losing a productive workforce.

City Club Missoula on Monday explored the issue by pressing advocates and opponents on the pros and cons of legalization under ballot measure I-190.

Opponents described pot as a gateway drug that leads to higher crime, car crashes and a lazy workforce. Supporters said it would bring new revenue to the state, create jobs, and come with the same personal responsibility as consuming alcohol.

“We decided a long time ago that adults should be able to chose what they do in terms of consuming alcohol,” said Dave Lewis, a former Republican legislator who helped pass Montana’s medical marijuana act and supports legalization. “Our state constitution says you’re an adult when you’re 18, except for alcohol. We will amend that to say except for alcohol and marijuana.”

Nearly a dozen U.S. states have adopted recreational marijuana laws including Maine, Michigan and Massachusetts. But most states where recreational pot is legal are in the West and include Colorado, California, Washington, Alaska, Oregon and Nevada.

But opponents, including Steve Zabawa, the treasurer of Wrong for Montana, said legalization has led to other problems. Among them, he cited an increase in vehicle crashes, visits to the emergency room, crime and greater use of other drugs, including “the white stuff.”

“Montana’s reputation is worldwide for pristine beauty and Colorado used to have that reputation,” said Zabawa. “Once they legalized, it became a place to party and smoke the skunk weed on the main streets in Denver. I haven’t seen anything good come out of marijuana other than get high, get stoned and get the munchies. Do we want to do that to our kids and our parents?”

Lewis, who chaired the Senate Appropriations Committee as a lawmaker, disagreed with Zabawa on the impacts of recreational pot. He said the revenue estimates suggest that 16% of adults would use the product if it was approved.

Lewis said the figure is based on Census data and other national figures. New Approach Montana used it to model new state revenue, which they placed at around $40 million in taxes tied to the potential sale of recreation pot.

“How the money is allocated is up to the legislature,” said Lewis. “The concerns expressed (by opponents) are way overstated.”

Hours before Monday’s discussion, the Montana Chamber of Commerce issued an editorial stating its opposition to I-190. The chamber suggested that “legalizing recreational use of marijuana could have devastating effects on Montana’s strained workforce.”

Zabawa, owner of Rimrock Auto Group, cited that opposition in his argument. While finding skilled and dedicated workers is already hard, he said legalizing pot would make it even harder, leaving businesses to pick through a lazy and unproductive workforce.

“The contractor’s association doesn’t need more stoned workers,” Zabawa said. “We know what the problems are with smoking marijuana. You’re forgetful. You’ve got a lack of this and a lack of that. It’s not good. Stoners aren’t the right way to go.”

Lewis disputed the “lazy stoner” perspective and said Montana prides itself on personal responsibility. It was the first state in the nation to repeal prohibition in the 1920s. If an adult chooses to drink alcohol, he said, they’re accountable for their actions.

The same holds true if they partake in marijuana, he said, and businesses could still adopt and enforce their own policies.

“Colorado has a zero tolerance policy. You have to agree to pass a drug test and live with a random drug test,” Lewis said. “They had a supreme court lawsuit trying to suggest that was intrusive and not appropriate. It was upheld by the Colorado Supreme Court. If people want a good job, you better not be using drugs. It’s just like the military and it works.”