So, here’s the question: How much power should local governments have to regulate firearms or prevent their possession by felons, minors, undocumented immigrants or people judged mentally incompetent?

Not much, according to backers of Legislative Referendum 130, the ballot measure sent to voters by Montana lawmakers last session.

Specifically, Legislative Referendum 130 asks voters to remove local governments’ power to regulate the carrying of concealed firearms – or to restrict the open carry of firearms – except in public buildings within a government’s jurisdiction.

The measure, if approved, also would repeal local government’s authority to prevent the possession of firearms by convicted felons, minors, undocumented immigrants and or people judged to be mentally incompetent. The measure doesn’t affect other federal or state firearms restrictions about such possession.

The question is being put to voters by the Montana Legislation after Gov. Steve Bullock vetoed a bill last session that would have accomplished much the same thing directly.

At the time, Bullock said Montana law had long protected “our basic right to keep and bear arms” while trusting local governments to decide “whether the mentally ill may bring guns into schools, or whether a local government can permit concealed weapons.”

LR-130 sprang the passage of a 2016 Missoula city ordinance that would have required that all gun sales within the city limits, including private sales, be subject to background checks. After changes and court fights, the Montana Supreme Court ruled the ordinance unconstitutional last year.

Second Amendment advocates saw the controversy as a step toward a greater patchwork of differing gun control restrictions across the state.

Gary Marbut, president of the Montana Shooting Sports Association, was one of the ballot issue’s architects.

He said that Montana already has a preemption law that, when boiled down, effectively prohibits local governments from regulating guns.

“All local governments are creatures of the state,” Marbut said. “LR-130 reinforces the restriction in the Montana Constitution on our right to keep and bear arms.”

Concerns have been raised about the wording of LR-130. Shortly after its legislative approval, opponents challenged the referendum’s language, but Montana’s Supreme Court ruled that LR-130 would appear as is.

Opponents of the measure include the Montana School Boards Association, led by executive director Lance Melton. His organization worried that the measure could make it impossible for schools to regulate the possession of weapons on school grounds, such as parking lots.

“If school districts are construed to be local governments, then it could potentially usurp their authority to regulate the possession of weapons on school campuses outside of school buildings,” Melton said. 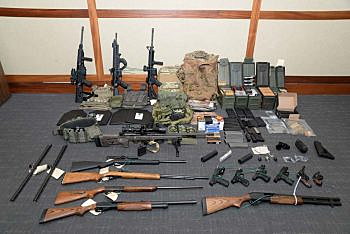 Other critics are backing up their opposition with campaign cash and in-kind donations. As of Aug. 2020, one group, “NO on LR-13” reported donations of more $232,000. Money from supporters has come in a comparative trickle. One lump sum cash donation of $16,000 came from the NRA Big Sky Self-Defense Committee.

The Montana League of Cities and Towns, led by executive director Tim Burton, has made more than $9,000 in donations or in-kind services to the “NO on LR-130” group,

Burton said the league’s primary concern is that LR-130 would take away local power to make local decisions.

“First of all, LR-130 would take away local government’s rights to make local decisions,” Burton said. “Our real concern is that LR-130 is bad for Montana. This ballot is poorly written, it’s confusing, it’s unnecessary, potentially unconstitutional and unsafe.”

Despite such opposition, proponents of the ballot measure are confident LR-130 will pass.

State Rep. Matt Regier, a Columbia Falls Republican, sponsored the original legislation. He is confident Montanans will pass that initiative, he said, because it would lessen confusion on concealed carry regulations across the state.

One of the main functions of the ballot initiative, Regier said, is to provide uniformity across Montana for concealed carry permit holders.

“I myself am a concealed carry permit holder, and we want to follow the law,” he said. “If every city and every county has a different ordinance, it would be impossible to even drive across the state,” Regier said.

“LR-130 is an attack on freedom,” von Lossberg said. “My job as a local official is to act in the interest of the public safety, well-being and welfare of my constituents. This initiative makes that job much harder to do because it eviscerates local control.”

Alex Miller is a journalism student at the University of Montana.