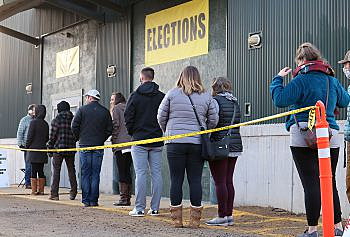 (KPAX) While Montana has already set a record for votes cast in a general election, thousands more of Montana voters headed to the polls Tuesday, to decide races that will help chart the political course for the state and the nation.

As of Tuesday morning, more than 535,000 Montanans had already voted, largely by mail, surpassing the previous general-election record of 2016 by some 18,000 votes.

Those votes alone put the turnout at 71.5 percent of registered voters, and tens of thousands more votes are expected to arrive by mail or be cast Tuesday, at county election offices and, in 11 counties, regular polling stations.

The record turnout will decide one of the biggest U.S. Senate races in the nation – Republican U.S. Sen. Steve Daines vs. Democratic Gov. Steve Bullock – and choose a new governor and U.S. House representative.

President Donald Trump also is on the ballot, of course, and is expected to win Montana’s three electoral votes – although Democrat Joe Biden is also expected to make things much closer than did Hillary Clinton four years ago, when she lost to Trump in Montana by 20 percentage points.

The contest between Daines and Bullock has been demanding most of the attention, and money, as spending on the race has shattered all Montana records for a single campaign. More than $160 million, or twice the previous record, has been spent on the battle, including $70 million raised just by the candidates.

The Daines-Bullock matchup is one of a half-dozen Senate contests nationwide where Democrats believe they can win a Republican seat and perhaps gain majority control of the U.S. Senate. The race has attracted donors from every state in the nation.

Most public polls have shown the race to be close and sources told MTN News that internal polling pretty much shows the same. One of the big unknowns is how the huge turnout may affect this race – who are the new voters showing up, and who are they voting for?

Sources also told MTN News that as many as 15 percent of the voters who’ve cast ballots so far did not vote in the previous three federal elections.

Bullock entered the race just seven months ago, after saying he wouldn’t, and both his campaign and its allies have outspent Daines and Republicans by almost $30 million.

In the governor’s race, Republican U.S. Rep. Greg Gianforte, who lost the governor’s race to Bullock four years ago, is making a second run for the office, this time against Democratic Lt. Gov. Mike Cooney. Libertarian Lyman Bishop of Kalispell also is in the race.

Gianforte has spent $7.5 million of his own money on his campaign and polls generally have shown him with a several-point, single-digit lead over Cooney. Should he win, Gianforte would become the state’s first GOP governor in 16 years.

Republicans also are expected to maintain their majority control of the Legislature. If Gianforte is the next governor, it would be only the third time in the past 50 years that the GOP controlled both the Legislature and the governorship.

Another likely close contest is the battle for Montana’s only U.S. House seat, between Republican state Auditor Matt Rosendale and Democrat Kathleen Williams.

The seat is open, since Gianforte is running for governor, and most polls have shown this race as a near toss-up – although Republicans certainly have the historical advantage, holding the seat since 1996.

Williams, however, has outraised Rosendale by $2 million and national groups are paying attention to the race, dumping in several million dollars in outside spending.

Williams, a former state legislator from Bozeman, lost to Gianforte in 2018 by five percentage points, and Rosendale is coming off a close 2018 loss to Democratic U.S. Sen. Jon Tester.