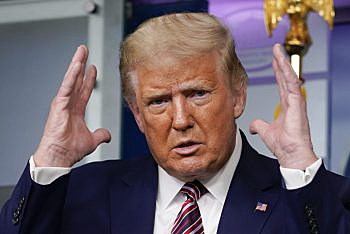 WASHINGTON (CN) — ’Twas the morning before Christmas, and all through the House, Republicans broke with the president Thursday to block direct payments of $2,000 for Americans who have slogged through the nearly yearlong Covid-19 pandemic with limited government assistance.

The conflagration erupted after President Donald Trump said he would veto a Covid-19 relief bill that lawmakers finally hammered out this week after more than six months of infighting over the dollar amount to send families  — all while the novel coronavirus has made millions of Americans sick, depressed the job market and caused record food instability.

Separately, meanwhile, lawmakers have worked to shore up $1.4 trillion for government funding until September 30, 2021, after passing a slew of continuing resolutions to avert a shutdown for the end of an already blighted year.

President Donald Trump threw their efforts into a tailspin Tuesday night, however, when he vowed in a 14-minute video to Facebook that he would the Covid-19 relief bill unless the payments for Americans were upped to $2,000.

“I am also asking Congress to immediately get rid of the wasteful and unnecessary items from this legislation and to send me a suitable bill, or else the next administration will have to deliver a Covid relief package,” Trump said. “And maybe that administration will be me. We’ll get it done.”

Payments of $2,000 had been the very thing Democrats sought and failed to secure in negotiations, but Republicans stood in the way Thursday morning as House leadership sought unanimous consent to send such chcks directly to families.

Rather than go in person, Minority Leader Kevin McCarthy sent the Virginia Republican Don Beyer to object in his place.

After the unanimous request failed, Majority Leader Steny Hoyer was blunt about what happened.

“Since March we have been attempting to respond, appropriately and timely,” the Maryland Democrat told reporters.

Hoyer underscored how Republicans had fought since May against their $3 trillion Heroes Act, which would have included $1,200 stimulus checks and $600 enhanced unemployment checks.

“When it was passed, McConnell said, ‘let the states go bankrupt,’ and the leader of the Republican Party and House of Representatives said, ‘let’s wait and see,’” Hoyer said. “And of course what we saw was continuing debt of our people, a continuing challenge to our hospitals and our workers, continuing devastation to our families from an economic perspective. We urged Republicans to come to the table with us … but we could get no movement as the country continued to lose citizens as a result of Covid-19 and continued to have economic challenges.”

Michigan Representative Debbie Dingell excoriated the president for meddling at the last minute.

“He doesn’t give a damn about people. He sowed more fear. He threw more kerosene on a fire,” the Democrat said.

Hoyer and Dingell both expressed eagerness to see a new Congress and president ushered in. Congress is expected on January 6 to formalize President-elect Joe Biden’s victory, recently certified without issue by the Electoral College.

At least two Republican House members, North Carolina Representatives Madison Hawthorne and Ted Budd, have signaled they will object to certifying the election that sent them to Congress.

Another point of contention with the bill for Trump was its inclusion of aid to foreign nations.

“This bill contains $85 million for assistance to Cambodia, $134 million to Burma, $1.3 billion for Egypt and the Egyptian military, which will go out and buy almost exclusively Russian military equipment; $25 million for democracy and gender programs in Pakistan, $505 million to Belize, Costa Rica, El Salvador, Guatemala, Honduras, Nicaragua and Panama,” Trump said.

In actuality, the White House authorized funding for all of those nations. While Trump was aggrieved over the relief and spending bill’s foreign aid investment, which included $505 million for a group of Central and South American nations, his own 2021 congressionally approved spending bill called for nearly $520 million.

Providing aid to nations in this region is key to managing the flow of immigration into the United States, a keystone of the Trump administration.

Pointing to a national study by the Federal Reserve Bank in New York, Johnson said he was unsure the last round of direct payments caused any stimulation of the economy.

Johnson noted that the national debt has swelled to $28 trillion, while the CARES Act has not yet run dry.

Speaker of the House Nancy Pelosi noted that during the months it took to get here, Democrats had called for larger payments but Trump’s proxy during negotiations, Treasury Secretary Steve Mnuchin, insisted the White House would not budge on payments over $600.

Government funding is continued through Monday, and a vote will be held on the House floor then to contend with checks plus other issues looming ahead, like Trump’s Wednesday obstruction of the 2021 National Defense Authorization Act — a veto that Congress is likely to override.