Citing national standards and changing uses, the City of Missoula is looking at a comprehensive plan to lower the speed limit on residential streets and in turn, reduce the number of crashes and their severity.

“We receive a lot of citizen complaints about speed,” Weiss said. “It’s potentially the most frequent call we get. We try to keep track of them the best we can. Really, only our wealthier neighborhoods have seen traffic calming.”

“People are going to make mistakes when they’re traveling. Those mistakes shouldn’t be fatal or incapacitating,” he said. “Our infrastructure should be forgiving. It should be designed in a manner where mistakes don’t cause serious problems.”

While some methods could result in wider improvements, such as reshaping certain streets and installing traffic-calming devices, those methods are often the most expensive.

Other cities, including Seattle and Boulder, have established a blanket speed reduction at 20 miles per hour unless otherwise posted. Such an approach could be explored in Missoula.

“These blanket speed-limit reductions have been shown to be effective,” Weiss said. “They’re being implemented in a lot of places. But it’s not currently feasible in Missoula due to our state laws.”

Weiss said that state law has placed 25 mph as the minimum speed limit permitted without a wider engineering study. But other cities in other states have found workarounds, and an engineering study is already underway in at least one Missoula neighborhood.

The results of that study could be extrapolated to Missoula as a whole.

Weiss said city staff is taking that approach as it works proactively to address speeding and safety on neighborhood streets.

“We’d have grounds to stand on to lower the speed limits on those streets when the time comes from that stat law perspective,” Weiss said. “The slight hesitation to do that and extrapolate that out across the entire city could take time away from the road design elements we would otherwise be able to get to more quickly.” 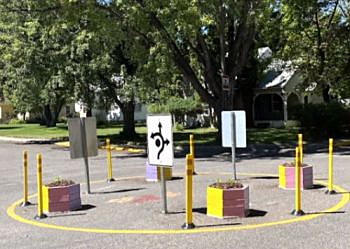 “We’re facing a troubling reality in the United States. We have the highest fatality crash rate in the industrialized world, where other countries are seeing a decrease in their rate,” she said. “Wider roads permit driver comfort and higher speeds.”

To address the issue, the Neighborhood Traffic Management Program has divided residential streets into three categories based on volume and goals. Additional stop signs may be one affordable option while temporary traffic-calming circles painted onto the ground is another.

Such improvements will be made in the Franklin to the Fort Neighborhood on a trial basis, Weiss said.

“When we get complaints or citizen requests, we’ll track those complaints all in one place. We’ll collect and analyze the baseline data using safety as our first line of measure,” he said. “By being proactive, we’ll get at these locations where people are complaining already.”