It’s not hard to trace the links between Malheur and Washington; familiar insignia, instigators and ideologies fueled both anti-government actions. Extremist leaders and movement regulars from the Western U.S., including former Washington State Rep. Matt Shea, who supported the efforts from afar in Spokane, and recent U.S. Senate candidate Jo Rae Perkins, R-Ore., who joined the crowd that laid siege to the Capitol, helped fuel the melee.

Backing their message, if not their tactics, was a bevy of Western legislators, who lent the movement legitimacy by supporting Trump’s baseless election fraud claims.

Meanwhile, one of the most visible figures in the anti-federal government movement in the Western U.S., Cliven Bundy, expressed dismay that President Trump didn’t stick to his guns after he issued a half-hearted message calling for a peaceful end to the occupation. 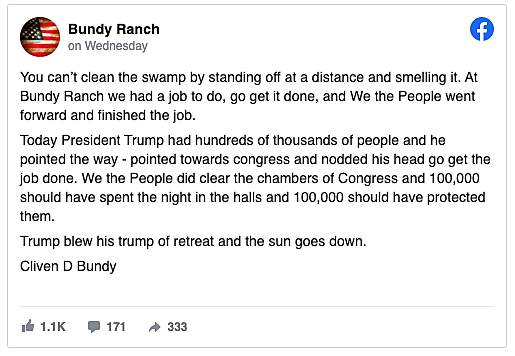 The anti-government occupations bookending the rise and fall of Trump’s presidency show the mainstreaming of right-wing extremism in the United States. They also portend the potential for future conflicts here in the West. When President-elect Joseph Biden takes charge of the federal government and its vast Western landholdings, he will enter an already delicate situation, where armed extremist groups stand ready to rise up against the federal government.

THE WESTERN U.S. isn’t the only place where anti-government sentiment festers, but here the wounds are open, frequently endured and historically recent. Violence and the threat of violence in the region occur within the context of a nation founded on the genocide of Indigenous people. Leaders of anti-federal movements lean into this violent history and include factions that are specifically anti-Indigenous. In defending his right to graze cattle on federal land in Nevada — a claim he successfully defended at Bunkerville in 2014, when federal authorities withdrew after being outgunned by militiamen — Bundy argued that his claim to the land was more legitimate than the Southern Paiutes’ because “they lost the war.”

This white-plus-might-makes-right sentiment is a pervasive feature of Western mythology and cowboy culture. Over the last half-century, anti-government leaders have rallied to that image as the West’s population swelled and control over its natural resources became more contested and regulated. The original Sagebrush Rebellion of the mid-to-late 1970s — which inspired the modern Bundy-led standoffs but were not nearly as paramilitary — came in response to federal public land laws like the Federal Land Policy and Management Act, Wilderness Act and Endangered Species Act, which increasingly restricted how natural resources could be used.

Those restrictions were seen as unconscionable overreach by rural Westerners who were accustomed to using public land resources as they wished. “The hardest thing to do in American politics is to withdraw a right,” said Daniel McCool, a political science professor at the University of Utah.

Even though those rights were privileges in the legal sense, the perception that they were rights, and that they were being taken away, fueled the original Sagebrush Rebels, McCool said. “The roots of the Sagebrush Rebellion were when they no longer got what they wanted,” he said. “There’s a direct line from there to the Bundy groups active today.”

Entitlement isn’t the only feature of today’s anti-government protesters — who snapped selfies and strolled casually through the Capitol after overcoming police barricades, sauntering off with trophies taken from the office of House Speaker Nancy Pelosi, D-Calif. — have in common with the original Sagebrush Rebels. They also share an alliance with the Republican Party and a lack of accountability for breaking the law. None of the original rebels were prosecuted, and their movement faded with the election of Ronald Reagan, who publicly backed their anti-regulatory ideology. Reagan showed his support by installing Interior Secretary James Watt, who weakened many of the federal regulations they chafed against.

FAR-RIGHT TERRORISM is the most prevalent form of terrorism in the U.S., according to the FBI. Reporting by Reveal News and Type Investigations found that right-wing extremism during the Trump administration has become more common and far more deadly. But that uptick comes with a caveat when it comes to Western extremism. During the Trump era, right-wing extremism and the militia movement shifted its focus from the federal government to other targets, like anti-fascist activists and state and local governments, according to the Anti-Defamation League.

The explanation for this shift in target is simple: Anti-federal extremists found common cause with Trump’s presidency as he promised to “drain the swamp,” catered to racist ideologies and flirted with QAnon conspiracy theorists. He and his administration acted directly in the interest of Western factions within the right-wing extremist movement, including the Bundys.

In 2018, Trump pardoned Dwight and Steven Hammond, whose imprisonment for felony arson on public lands helped spark the Oregon standoff in 2016. No attempts were made during his administration to enforce federal law by rounding up Cliven Bundy’s cattle, which continue to illegally graze on federal public lands in Nevada. Just a week before the siege of the Capitol in Washington, D.C., the Bureau of Land Management restored the Hammonds’ public land grazing rights in Oregon, despite their record of endangering federal employees and committing arson.

Those actions — and the inability of federal prosecutors to secure convictions for leaders of the Bunkerville and Malheur occupations, who clearly threatened federal agents and held federal land at gunpoint — emboldened anti-government extremists. After the acquittals, the movement felt vindicated and victorious.

“It’s a very heady thing to be involved in,” said Betsy Gaines Quammen, the author of American Zion: Cliven Bundy, God and Public Lands in the West. “It was pivotal in empowering this movement and laid the groundwork for what we saw (on Jan. 6 in the Capitol),” she said.

A former BLM staffer from Southern Utah echoed that conclusion. “There is a clear link with the Bunkerville showdown and Malheur Refuge occupation and what happened yesterday at our nation’s Capitol,” Richard Spotts wrote to High Country News. In dodging accountability for their actions the Bundys “have been aided by weak and incompetent federal law enforcement officials,” wrote the former BLM employee who was based in St. George, Utah from 2002-2017. “I hope that the incoming Biden administration won’t make Obama’s mistakes nor allow meek federal land managers and law enforcement officials to continue hiding under their desks,” Spotts wrote.

While the Trump era has empowered anti-government extremists in new and dangerous ways, it has offered some relief to the public land employees in the West who often bear the brunt of extremist ideologies. Data collected by Public Employees for Environmental Responsibility (PEER), a group that supports public land reforms and agency employees, found that threats against federal employees and facilities dropped precipitously following Trump’s election. In 2017, the BLM recorded a 25% reduction in such incidents, the lowest number since 1995.

The Bundys didn’t see the federal government under the Trump administration as the enemy, said Jeff Ruch, the former executive director and current Pacific director of PEER. “The administration acted in concert with the violent movement’s demands,” he said.

WITH THE TARGET no longer on the federal government’s back, anti-government extremists in the West have aimed their tactics at left-wing protesters and at state and local governments. Throughout the Trump administration, the president’s supporters went to Portland, Oregon, ready to brawl with locals and anti-fascists, who countered their demonstrations and often obliged their violent impulses. Members of the Three Percenters vowed to support Oregon state legislators who fled the state to avoid a vote on climate change legislation in 2019, including Sen. Brian Boquist, who said that if the state police wanted to arrest him for fleeing his legislative duties, they should “send bachelors and come heavily armed.”

This past summer, when protests over racial inequity spread across the nation in the wake of the killing of George Floyd by police, right-wing paramilitary groups in places like Missoula, Coeur d’Alene, Idaho, and Olympia, Washington, showed up in combat gear, ostensibly to keep the peace and protect property.

Recently, right-wing extremists have found a new cause: the COVID-19 pandemic and consequent public health measures, such as business closures and mask mandates. Western extremist groups like the Three Percenters and Ammon Bundy’s newly formed People’s Rights organization have been “seizing on the pandemic and trying to build political power, mainstream their beliefs and build public trust,” said Amy Herzfeld-Copple, the deputy director of the Western States Center. Ammon Bundy, who has played a prominent role in protests against public health orders, was arrested twice this summer for disrupting the Idaho Legislature.

A couple of weeks before the insurrection in Washington, D.C., demonstrators in Salem, Oregon, made a sort of watered-down test run. On Dec. 21, protesters demonstrating against public health restrictions broke down doors at the state Capitol and attacked journalists covering their rally. Since then, reports have emerged that they gained access to the building with aid from Republican state Rep. Mike Nearman, a claim that draws comparison to accusations that federal police officials aided the crowds that entered the U.S. Senate and House.

This groundswell of anti-government extremism in response to Trump’s failed claims of election fraud and the coronavirus pandemic has turned the nation into a possible powder keg. “We’re likely to see the effects of their violence for years to come,” said Herzfeld-Copple. “It’s an extension of a pattern of local government being threatened by political violence.”

While no one knows whether Trump’s departure from office will be a source of continued unrest, history clearly indicates that the threat of future violence is likely to lie in the West and its federal public lands. Biden’s pledges to act on climate change and restore Bears Ears and Grand Staircase-Escalante, two national monuments that were shrunk by Trump, could be flashpoints.

“By simply doing their job, the Interior Department will create more potential flashpoints,” said Aaron Weiss, the deputy director for the Center for Western Priorities. “Being good stewards means rounding Bundy cattle up. They can’t continue to coddle these extremists.”

Now, the West and rest of the country are left wondering where these tensions will flare up next. History tells us that any attempts at an ambitious federal public land policy will be met with right-wing resistance.

And yet there are hopeful touchstones in the region, including the site of the last Bundy occupation in Burns, Oregon. Collaboration and community conversations around land management, both before and since the 2016 occupation, blunted local support for the extremists who descended on the small eastern Oregon town.

According to Peter Walker, a University of Oregon geographer who chronicled the occupation and aftermath in his book Sagebrush Collaboration: How Harney County Defeated the Takeover of the Malheur Wildlife Refuge, one local rancher told him: “Collaboration is what inoculated us from the Bundy virus.”

“Instead of a glamorous revolution,” as promised by the Bundy-led militants, Walker told Oregon Quarterly, the community embraced a less exciting, but far more democratic and peaceful approach. “Harney County (has) returned to the much less glamorous, time-consuming, sometimes tedious but often effective work of sitting across the table with people of different viewpoints to find mutually beneficial, practical solutions to shared problems.”

This story originally appeared online at High Country News and is republished here by permission. Carl Segerstrom is an assistant editor at High Country News, covering Alaska, the Pacific Northwest and the Northern Rockies from Spokane, Washington. Email him at carls@hcn.org or submit a letter to the editor.