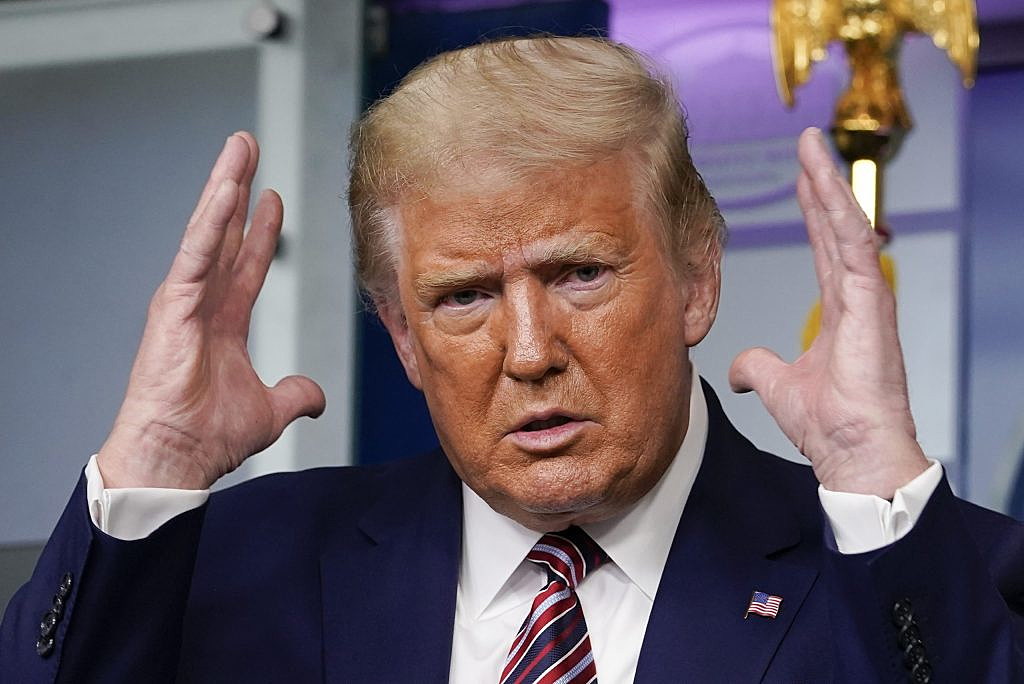 WASHINGTON (CN) — Former President Donald Trump lost another attempt to declare himself immune from criminal investigations, with the Supreme Court refusing Monday to block a New York subpoena of his tax records.

Per its custom, the court did not issue any opinion along with their order denying Trump a stay that would delay the ongoing criminal probe headed up by Manhattan District Attorney Cyrus Vance. Though the scope of Vance’s probe remains unknown, Trump’s attorneys have been fighting in the courts for over a year to keep a grand jury from obtaining his financial records from his accountants — effectively keeping the probe in limbo.

Vance’s investigation initially focused on hush-money payments that Trump’s former lawyer and fixer, Michael Cohen, made before the 2016 election to two women ― adult-film actress Stormy Daniels and former Playboy model Karen McDougal ― who said they had sexual encounters with Trump.

Cohen was sentenced to three years in prison for his part in facilitating those payments, which prosecutors noted were made “at the coordination with and the direction of Individual-1.”

Daniels, whose real name is Stephanie Clifford, had sued Trump for defamation over a tweet in which he dismissed her claims of being threatened in 2011 to keep quiet about their affair as a “total con job.”

A federal judge dismissed the lawsuit in 2018 and ordered Daniels to pay nearly $300,000 in attorneys’ fees.

In a separate order Monday, the Supreme Court refused to breathe new life into that case.

Representatives for Donald Trump and the Trump Organization did not immediately respond to requests for comment Monday morning.

Trump is expected to make his first public appearance since leaving White House, speaking on Sunday at the Conservative Political Action Conference.

In Trump’s challenge to Vance’s investigation meanwhile, Vance’s office has prevailed at every stage to date. After the prosecutor won a scathing ruling from the trial judge, he saw the it largely upheld on appeal and in July by the highest court of United States.

The Second Circuit handed Trump another defeat this past fall, leading up to the 2020 election that he would ultimately lose. In his ensuing emergency application to the Supreme Court, Trump asked the justices to keep the grand jury subpoena on hold pending his petition for a second writ of certiorari.

Trump’s attorneys claimed he would suffer irreparable harm without the delay and that he should be afforded the opportunity to argue his serious overbreadth and bad-faith claims before his tax returns are disclosed.

“Even if the disclosure of his papers is limited to prosecutors and grand jurors, the status quo can never be restored once confidentiality is destroyed,” the 46-page petition from Trump’s attorney William S. Consovoy argued. “But the harm will be more than irreparable if the records are publicly disclosed. It will be case-mooting — the strongest possible basis for a stay.”

Trump brought the case here just before the original 2019 deadline of Vance’s subpoenas, making the breathtaking argument that no prosecutor, federal or state can subject a sitting president, his businesses or his allies to the criminal process while he is in office, even if that investigation involves conduct that preceded his term in office. U.S. District Judge Victor Marrero called that concept “repugnant” to democracy in October 2019.

In late September 2020, The New York Times published the results of its own investigation into Trump’s tax returns, exposing that Trump paid just $750 in federal income taxes in 2016, the year he won the presidency, and in 2017, his first year in office.

The New York Times’ investigation, which Trump hastily dismissed as “totally fake news,” also found that he paid no federal income taxes in prior years going back a decade.

Trump is also under audit over a $72.9 million tax refund that could cost him more than $100 million if the IRS rules against him, the Times revealed.