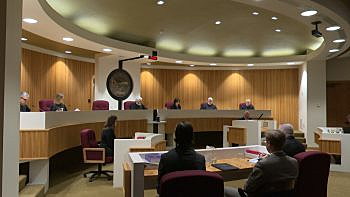 HELENA (KPAX) — Republican leadership at the Montana Legislature Thursday ratcheted up their inquiry into alleged bias by the Montana Supreme Court, ordering its justices to produce, by Monday, any internal communications about bills before the Legislature.

The subpoena for McLaughlin ordered her to appear Monday morning before a special legislative committee that Republicans formed this week, to investigate the judiciary.

“Recent revelations have raised serious concerns about the procedures and conduct of Montana’s judicial branch of government,” House Speaker Wylie Galt and Senate President Mark Blasdel said in a statement. “We must maintain the integrity of the judicial branch so it can perform its critical functions vested by the Montana state constitution.”

Legislative Democrats, however, have denounced the newly formed committee as a “witch hunt” and said Republicans are simply trying to smear and control the state’s judiciary, for political purposes.

“By forming this inquisition, legislative Republicans are deepening the constitutional crisis that they’ve already manufactured, in their effort to destroy the last remaining checks and balances on their power,” said House Minority Leader Kim Abbott and Senate Minority Leader Jill Cohenour.

Democrats said the Republican majority is passing numerous unconstitutional laws this session, and is trying to undermine the judiciary that will rule on laws that are challenge in court.

Thursday’s subpoenas mark the latest development in an escalating political battle between legislative Republicans and the judiciary, sparked by the passage of Senate Bill 140, which gives Republican Gov. Greg Gianforte more direct power to choose who he appoints to fill vacancies at the Supreme Court and state district courts.

Under the old system, in place since 1973, the Judicial Nomination Commission accepted applications for judicial vacancies and forwarded three to five finalists to the governor, who had to choose from that group of finalists.

Under SB140, Gianforte essentially can appoint anyone he chooses, as long as they meet certain legal qualifications.

Republican leaders have said the new law is meant to give the governor more control over appointing judges in Montana.

The day after Gianforte signed SB140 into law on March 16, several former state officials, a tribal official and the League of Women Voters filed suit, asking the Supreme Court to strike down the law as unconstitutional.

Yet within the next two weeks, Republicans somehow obtained internal emails from the judiciary showing that judges had been polled on the bill in January. GOP leaders then started questioning whether the Supreme Court had prejudged the law, and would be impartial judging its constitutionality.

Last week, GOP leaders at the Legislature issued a separate subpoena to the state Department of Administration and obtained more than 2,400 of McLaughlin’s emails, and began releasing some to the media.

Most of the emails show Supreme Court justices, judges and judicial branch staff and lobbyists commenting on various bills before the Legislature that would affect the judiciary, including strategies to oppose and defeat some of the bills.

McLaughlin has filed two requests with the Supreme Court to quash that subpoena and stop the release of her emails. The court ruled in her favor on the first one, but Republicans said they would not comply with the ruling.

However, the state Department of Administration – which is part of the Gianforte administration – said this week it would comply and release no further emails from the judiciary.