Missoula candidate for mayor under investigation for sexual assault 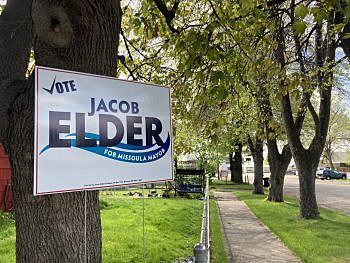 (Daily Montanan) Jacob Elder, who filed to run for mayor of Missoula, said this month he is under investigation for “sexual assault” and a claim he is a “sexual predator,” and the inquiry could conclude as soon as this week. In a brief phone call last week, Elder said the claims were baseless.

Elder is a student at the University of Montana Alexander Blewett III School of Law. A court records search in Missoula County shows he has not been charged with a crime related to the allegations.

A source affiliated with the School of Law confirmed an investigator from a private firm interviewed people at the law school last year in connection with the allegations.

“We should have the conclusion hopefully this week or next week,” Elder said in the May 5 phone call with the Daily Montanan. “And after that, I will publicly address the issue.”

In July 2020, UM entered into a contract with Grand River Solutions, a California firm that describes its specialty as providing Title IX, equity and Clery Act support services to K-12 schools and institutions of higher education.

The contract required an investigator “with training in trauma-informed investigations, sexual violence investigations, Title IX, and the application of due process.” The agreement said the firm would investigate “potential policy violation(s)” and not render a determination on whether there was a potential legal claim or statute violation.

UM spokesperson Dave Kuntz said this week Grand River Solutions is still under contract with the University of Montana, and the firm has completed the majority of its work.

“Once that contract concludes, the university will be able to share the status of the investigation,” Kuntz said.

Last week when the Daily Montanan called Elder to set up an interview, he said he would only briefly address the allegations against him. Elder proceeded to describe the “backdrop” of the investigation and said the allegations arose after he went on a date.

In the call, Elder said the school conducted an investigation in early 2020 and found he had not violated the student code of conduct. Elder, 28, declined to provide a document from UM that confirmed the result when asked in a subsequent message.

However, in the May 5 phone call, Elder said a Facebook page started in July with “sexual predator rhetoric.” He said UM informed him a new investigation had opened based on the same issue, and an outside investigator would take the case.

Elder said he then learned the woman also alleged that “I had grabbed her crotch and wouldn’t let it go.” He said that anecdote “kept me up for nights and my family has suffered for this.”

“I can assure you there is no evidence,” he said. Elder declined a sitdown interview.

According to the contract, Grand River Solutions was hired to conduct “an impartial investigation, with the specific scope to be determined by the university.” The agreement listed two “trained, experienced senior investigators” to be assigned to make factual findings and, “if requested, come to a conclusion about what is known about the allegations and whether respondent(s) violated the university’s policies.”

The contract does not outline the specific scope of the investigation in detail. It directs the investigators to contact the university should they have questions about it.

“The investigators will work with the university to determine whether matters under investigation should be included in one, two, or more investigation reports,” reads the contract.

Helen Thigpen, deputy legal counsel for the Montana Office of the Commissioner of Higher Education, said she was not aware of a process by which a campus can open an investigation on a matter that was already settled other than an appeal.

A relative newcomer to local politics, Elder has pitched himself as an “agent of change” against incumbent John Engen, Missoula’s longest serving mayor who is seeking a fifth term. Engen and Elder are the only candidates who have filed to date; filing closes June 21.

On his campaign website, Elder blames Engen’s “surrogates” and “other trolls” for spreading “wild claims” and engaging in a “smear campaign” against him. Elder said an “upstart candidate” will always have to overcome such challenges when facing a “career politician.”

“These are all false smears and I categorically deny them,” Elder said on his website.

In a phone call, Engen said he is not meddling in his opponent’s campaign or attempting to smear him.

In a statement, UM spokesperson Kuntz said Equal Opportunity and Title IX investigations are conducted confidentially and without public disclosure to ensure all affected parties receive support and an impartial analysis. He said students and employees need to know that they can participate without the fear of retribution or unwanted publicity.

“The University of Montana does not publicly comment on Title IX investigations,” Kuntz said. “The reason is because UM wants to encourage all students and employees to report sex-based discrimination and sexual misconduct to UM’s Office of Equal Opportunity and Title IX.”