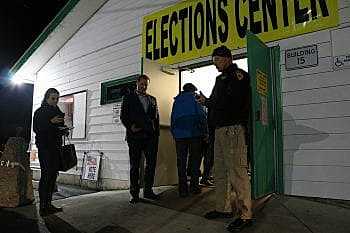 HELENA (Daily Montanan) Montana tribes and two nonprofits are suing the Secretary of State over two bills they say unconstitutionally infringe on Native Americans’ ability to vote in Montana.

The bills being challenged are House Bill 176 and part of House Bill 530, which would respectively end late voter registration on Election Day and put restrictions on ballot collections, a popular tool for Get Out the Vote efforts. Both bills have been signed into law.

The plaintiffs are Western Native Voice, Montana Native Vote, Blackfeet Nation, Confederated Salish and Kootenai Tribes, Fort Belknap Indian Community and Northern Cheyenne Tribe. They are represented by a collection of eight lawyers with various groups including the national American Civil Liberties Union, the ACLU of Montana and the Native American Rights Fund. The sole defendant is Christi Jacobson, Montana’s secretary of state, who could not be immediately reached for comment.

“House Bill 176 and Section 2 of House Bill 530 harm Native Americans in rural tribal communities across the seven Indian reservations located in Montana by impairing access to the voter registration process and voting by absentee ballot. In so doing, HB 176 and HB 530 violate the right to vote, freedom of speech, and equal protection of the laws protected by the Montana Constitution,” reads the suit, filed in Montana’s 13th Judicial District Court of Yellowstone County.

“For the average American, these bills may not seem unreasonable,” said Jacqueline De Leon, an attorney for the Native American Rights Fund. “But the circumstances facing Native Americans on the ground are very different than the average American.” She added that bills similar to the ones passed in Montana have been introduced around the country in what she called an effort to pass restrictive voting laws.

Supporters of the Montana bills say the measures are necessary to protect election security, while opponents have called them voter suppression efforts. Alex Rate, legal director of the ACLU of Montana, said there have been no documented cases of voter fraud in the context of same-day registration or ballot collection in Montana.

“If there had been, you know darn well it would have been brought up when they were debating the bills,” he said.

According to the lawsuit, Native Americans face higher barriers to voting like limited mail service on reservations, lack of access to the internet, higher poverty rates, and having to travel further to get to a voting location. Because of those barriers, Native populations often rely on same-day registration and ballot collection efforts to vote.

“These measures are not only blatant attacks on Native American communities but also pose a clear and present danger to the foundations of our democracy. HB 176 and HB 530 violate arguably our most important right — the right to vote. These harmful bills will prevent many Montanans from exercising that fundamental right to participate in the democratic process,” Rate said in a press release.

HB530, sponsored by Rep. Wendy McKamey, R-Ulm, restricts ballot collecting in a similar way the Montana Ballot Interference Prevention Act tried to do before being ruled unconstitutional in late 2020, according to the suit. The bill prohibits anyone who is receiving financial compensation from collecting another person’s ballot.

The organizations said the legislation’s terms “chill” any ballot collection efforts because of the risk of a $100 fine per ballot and limiting who can collect ballots. “HB 530’s limitation on who can collect ballots effectively ends Non-Profit Plaintiffs’ ballot collection activities and thus eliminated a core part of political speech and expressive conduct,” the suit read.

A bill introduced in this session that was more closely aligned with the BIPA law of 2018 — HB406 — failed to pass the Senate on April 14. But not wanting to ditch the effort completely, Sen. Steve Fitzpatrick, R-Great Falls, introduced the ballot collection amendment to HB530. Because the amendment was introduced on the Senate floor, there was no public testimony on the proposed change.

Both Montana Native Vote and Western Native Voice employ people to collect ballots on all seven reservations and urban Indian centers. In 2018, the two organizations hired 32 organizers that collected 853 ballots. In 2020 they collected more than 500 ballots, according to the suit.

Regarding HB176, which was sponsored by Rep. Sharon Greef, R-Florence, the plaintiffs say it eliminates a “key tool” for increasing voter turnout. Same-day voter registration has been in place in Montana since 2005.

“Providing rides to the county seat on election day is particularly important on rural reservations, where many individuals lack access to transportation. Many Native American voters also do not understand that they will need to re-register to vote if their address changes. They often find out about the necessity to re-register on election day itself and rely on Non-Profit Plaintiffs to provide a ride to the county seat,” the suit said.

According to the suit, in 2020, a single organizer for Western Native Voice, Lauri Kindness, was responsible for driving 150 people from the Crow reservation to register to vote at the Big Horn Elections Office.

But HB176 and HB530 are a small part of a more significant problem, according to the suit. “[The bills] are part of a broader scheme by the Montana legislature to disenfranchise Native American voters. Seemingly neutral laws that are in fact intended to exploit the vulnerabilities faced by Native voters, both bills were passed within a context of multiple attempts to impose barriers to Native Americans voting,” the lawsuit read.

Along with the failed HB406, the lawsuit said that legislatures voted down HB613, which it called a pro-Native American voting rights bill. It also cited SB169, HB325 and SB196 as examples of broad disenfranchisement. HB325 would elect supreme court justices by district, and SB196 would limit polling hours in low population districts, which are commonly found on reservations. SB169 and SB196 were signed by Gianforte, and HB325 will be on the ballot as a referendum in 2022.

Caitlin Borgmann, executive director of the American Civil Liberties Union of Montana, agreed that the bills are part of a larger problem on display during the 67th legislative session. “There were so many times this session when we told lawmakers that bills were unconstitutional and they absolutely did not care,” she said. “[Republicans] don’t seem to take seriously their oath to uphold the constitution and they defer completely to the courts to make a ruling that something’s unconstitutional … and it’s going to cost the taxpayers as a result.”

Nationally, De Leon said the Native American Rights Fund is tracking more than 100 bills in various states that she said would harmfully impact Native Americans’ access to the ballot box.

“I think right now there is an effort to pass restrictive voting laws in order to target vulnerable Native American and minority communities by making it more difficult to vote,” she said.