The 2021 Legislative session took a toll on some of Montana’s wild character, but state conservation groups are thankful for those legislators who fought for habitat and public land access.

On Friday afternoon at Milltown State Park, several conservation organizations came together to recognize four legislators for their work securing conservation funding during the 2021 Legislature, a session that all agree was unlike any other.

“We’ve had two legislative sessions with legislators who’ve recognized the need for (funding) to adequately manage our resources, to provide access and to protect our Montana environment. It’s historic because this is going into the future. We’re going to see (funding) that will benefit Montana for a long time,” said Bob Walker of the Montana Trails Coalition.

Each received a personalized engraved slice of a sinker log recovered from the former Milltown Reservoir, which covered the land where the Milltown State Park is now.

These and other legislators had their hands full trying to defend voter-passed initiatives and programs and funding that have long been part of Montana’s outdoor heritage.

House Bill 701 was the primary example. It was supposed to codify the marijuana initiatives voters passed in November. But while Ballot Initiative 190 stipulated that a significant amount of the 20% sales tax on recreational marijuana would go to conservation programs, the governor’s budget proposal and the first draft of HB 701 included little or no conservation funding.

Lobbying efforts by at least 29 organizations – many of which were represented at the Friday event – and a lot of legislators working across the aisle put conservation back into the picture to create the bill that finally landed on the governor’s desk. The result is State Parks and the new Montana Trails Stewardship Grant program each will receive $2 million a year, and the Habitat Montana Program will receive about $5 million a year starting in 2023. 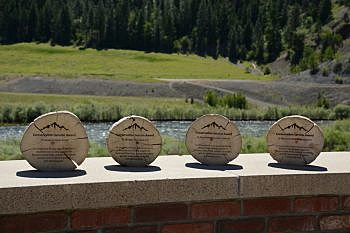 Habitat Montana is now allocated about $4.5 million every year, but HB 701 will eventually double that. Montana Wildlife Federation spokesman Nick Gevock said that would result in some “ big picture” conservation. Rep. Katie Sullivan said HB 701 is more than a marijuana bill because of the conservation benefits.

“I would consider HB 701 one of the biggest jobs and economy bills of the session,” Sullivan said.

Noah Marion of Wild Montana said Jacobson played a key role in passing HB 701, and he helped kill HB 640, a last-minute attempt to strip some of the money away.

“He has been a stalwart champion for conservation, for our parks, for our trails, for our working lands, for our outdoor way of life,” Marion said. “I’ve never seen a legislator work his own bills has hard as Tom does.”

Small and Hopkins weren’t able to attend the event, but Montana Conservation Voters political director Jake Brown said they helped spearhead the HB 701 effort through the two houses. Hopkins was the bill sponsor, and Small was part of a select committee that returned the conservation funding to HB 701.

“Both of their hard work really represents the best thing about Montana politics and that’s when people from different points of view come together, find compromise and deliver real results for Montana,” Brown said. “As a lesson for us, it’s an important reminder to make sure there’s room to work with anyone, regardless of political affiliation, as long as they share our conservation values and love for our public lands.”

While the event celebrated one of the few conservation victories of the session, Alex Philp, cofounder of Business for Montana Outdoors, sounded a sobering note, saying that Montana now faces a new threat that needs to be addressed: being loved to death.

In 1986, 800,000 people visited Glacier Park and now, it’s more than 3 million. That is beyond capacity so the park is basically closed to many Montanans, Philp said.

“There is the issue of the tragedy of the commons,” Philp said. “While we protect and restore and celebrate these incredible places, and we support the outdoor industry, I’m also challenging my colleagues to start looking at how we overuse these places in a way that will also have a negative impact on our bottom line. What that means is we, as an organization, are going to fight for private sector investment as well as public investment, so not only do we support access, but we’re also supporting a way of using these places that we don’t destroy the very thing that we love so much.”

“More than ever, it’s a new ballgame over there, and we need you paying attention this summer, next fall and certainly in the next election cycle,” Boldman said.