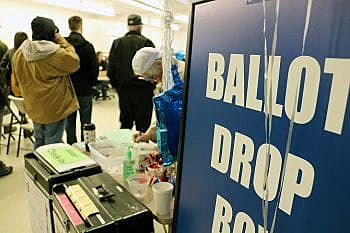 The Missoula City Council on Wednesday voted to move forward with a primary for three city races this September, even though the Missoula County Elections Office said that doing so wasn’t necessary.

The three races, including the mayoral race and City Council races in Wards 1 and 6, each have more than two candidates. Narrowing the field ahead of the General Election in November guarantees that a candidate is elected by a majority of voters, not a plurality.

“That’s the way our system is set up,” said council member Gwen Jones. We get the best candidates who are engaged, vested and work hard. I do not like it when candidates are elected by a fluke by not having a majority behind them.”

The council approved the primary on an 8-2 vote with council members Sandra Vasecka and Jesse Ramos voting in opposition.

Jones, who offered Wednesday’s motion to hold the primary, excluded the four city wards that have only two candidates running for office. Holding a primary in those races would provide the candidates with an unfair litmus test ahead of their November campaign.

“It’s not fair for a candidate to basically get a straw poll on their election,” Jones said. “They have to go the distance and run a regular race.”

City elections this year will feature all six City Council wards, the mayor’s office and three districts in Municipal Court. The mayoral race includes four candidates while Ward 1 also has four candidates. Ward 6 has three candidates vying for the seat.

City Clerk Marty Rehbein said the county elections office suggested that the threshold requiring a primary election hadn’t been met. Still, the City Council had the discussion to call for a primary, and whether the election will be held by mail or by polling place.

The council on Wednesday opted for the former.

Vasecka and Ramos questioned the need for a primary and sought to hold the General Election by traditional polling place. Vasecka cited election security while Ramos said many election outcomes don’t see majority support for any candidate.

“I don’t think the primary is necessary,” said Ramos. “But I’m glad to see the consistency among my council members. I think people win all the time with less than 50% of the vote in nation and state elections across the country.”

Others disagreed, saying election security was not an issue.

“It’s really important to have a primary when we have more than two candidates so voters get to decide by majority on who their next elected official will be,” said council member Amber Sherrill.