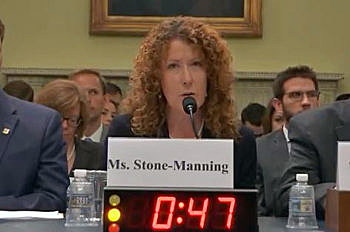 The U.S. Senate is set to vote as soon as Thursday on the nomination of Tracy Stone-Manning, a conservation advocate and former top aide to Montana Democrats, to lead the Bureau of Land Management, putting the end to her contentious confirmation process in sight.

Senate Majority Leader Chuck Schumer filed cloture on Stone-Manning’s nomination, setting the stage for a confirmation vote that could come later this week. If all Republicans in the evenly divided Senate oppose the nomination, Vice President Kamala Harris would be needed to cast a tie-breaking vote.

Stone-Manning, a vice president for conservation policy at the National Wildlife Federation, led the Montana Department of Environmental Quality under former Gov. Steve Bullock. She also worked as chief of staff to Bullock and a staffer for U.S. Sen. Jon Tester, a Montana Democrat.

Stone-Manning’s confirmation stalled for weeks this summer as Senate Republicans waged a fiery campaign against her nomination after reports of her involvement in a 1989 tree-spiking incident in an Idaho national forest resurfaced.

Stone-Manning denied firsthand participation in the scheme, an act of eco-terrorism, but did admit to mailing a threatening letter on behalf of a group that included two men later convicted for planning it. Republicans accused her of lying about her involvement, and said she only cooperated with investigators once she became a target.

After an explosive committee markup, the Senate Energy and Natural Resources Committee deadlocked on advancing her nomination. The committee, like the Senate, is evenly split between Democrats and Republicans.

The full Senate then voted, again along party lines, to discharge the nomination from the panel on a 50-49 vote, with one Republican senator absent, Mike Rounds of South Dakota.