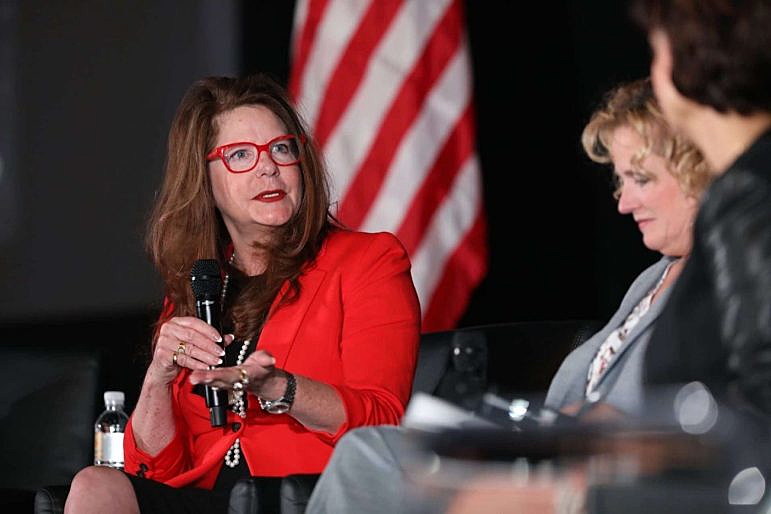 The same week Montana Superintendent of Public Instruction Elsie Arntzen told AA district leaders she took their feedback “humbly and seriously,” she told KGVO she believed the letter they sent outlining concerns about her lack of leadership was “heavy handed” and politically motivated.

“I do not know how the letter was written or who was involved in the making of the letter, but in my mind, it was directly political,” Arntzen told KGVO radio based in Missoula. “And if you look at the letter, where are students mentioned, and where is learning mentioned?”

Students and children both are mentioned in the first paragraph of the five-page letter and elsewhere. The letter also notes OPI does not appear to have made updated educational materials a priority, so students are being done a disservice because educators are “forced to teach to outdated standards.”

In an email Friday, OPI communications deputy Brian O’Leary did not answer specific questions about Arntzen’s statements to KGVO or the letter, but he said the Superintendent of Public Instruction is open to hearing concerns directly.

“The superintendent’s door is always open and she is readily available for conversations with school administrators, teachers and parents,” O’Leary said in the email. “The AA superintendents have never reached to the superintendent to express their concerns and seek solutions.”

The letter from eight AA superintendents representing 45 percent of Montana’s public schools enrollment to Arntzen expressed “no confidence” in her performance and demanded leadership at the Office of Public Instruction. Arntzen is a Billings Republican in her second term at OPI and earning $56.16 an hour, an annual salary of $116,813, according to the Montana transparency in government database.

The communication from the AA superintendents followed an open letter last month to the citizens of Montana from four county superintendents about problems at the Office of Public Instruction. Superintendents Erin Lipkind of Missoula, Cathy Maloney of Butte-Silver Bow, Susan Beley of Wheatland and Susan Metcalf of Sweet Grass said in their letter they serve Montana’s smallest, most rural schools.

“Due to the lack of support from the elected head of education in the state of Montana, our rural schools are suffering,” wrote the county superintendents. “It is time we voice our dissent. Ms. Arntzen’s leadership is not in the best interests of the 10,686 educational personnel in our state, nor the approximately 147,000 public-school students.”

Lipkind said Friday neither she nor her three colleagues have received a response from Arntzen to the letter, submitted electronically as public comment last month to the Board of Public Education and provided to Arntzen and Gov. Greg Gianforte. The letter, which Lipkind said came from the four signers and does not represent all county superintendents, stated a 90 percent turnover rate at OPI in the last five years as a “direct result of the ‘leadership’ of Ms. Elsie Arntzen.’”

The letter also said the superintendents were “appalled” that Arntzen participated at a Missoula “anti-public education” rally. At the meeting, one board member who spoke suggested parents should take their children out of public schools, and a lawyer joked, to laughter, that superintendents should be shot. The lawyer later said he was making a play on words and apologized, and Arntzen, who was not in the room at the time, condemned the remark.

However, the county superintendents said Arntzen should not be participating in forums that “tear down the very system she was elected to uphold.”

“We suggest that Ms. Arntzen must change her course and begin to support public education and the Constitutions to which she pledged an oath to uphold,” the letter said. “If she does this, OPI can re-build. If not, it will continue to flounder ineffectively and inefficiently, which makes our jobs and the jobs of everyone involved in public education more difficult.”

In his email, OPI’s O’Leary said senior staff addressed the issues in the letter from the county superintendents at the Board of Public Education meeting in November. At the meeting, OPI Deputy Superintendent Sharyl Allen noted recruitment challenges were in part due to the pandemic — and faced by many other employers.

She also said as of Nov. 1, OPI had filled 130 full-time equivalent positions of the 154 funded by the Montana Legislature, and jobs under recruitment were in the process of being filled. Additionally, she noted OPI was going to extraordinary lengths to fill a special education director job, but even working with a headhunter had yielded no qualified candidates at the time.

“Superintendent Arntzen has multiple avenues of communication with county superintendents from both OPI staff and senior staff,” O’Leary said in his email.

Greg Upham, one of the AA superintendents, said Friday he had called Arntzen on Wednesday at her request after she received the letter, and he reinforced the concerns raised from the eight district leaders. Upham, of Billings Public Schools, said time will tell if the response from her is satisfactory.

As for how the letter was drafted, he said it was written by the superintendents with information taken from people in district offices who have shared concerns about OPI, and with help from legal counsel.

The AA superintendents have been meeting weekly since COVID-19, he said, and they decided to send the letter after a culmination of issues with OPI.

Superintendent Rob Watson, of Missoula County Public Schools, said the letter made it clear the problems are related to leadership, not politics, and he said leadership requires being accountable. He pointed to the staff turnover rate as one example.

“I think we’re all experiencing staffing struggles, and that’s understandable,” Watson said. “On the other side of that is retaining current staff that you have. We practice that in the district. We know we can’t lose any right now because it’s really hard to find folks. That’s an example of a leadership area she could focus on. But that takes accountability.”

He said some of the issues identified in it have been topics among the superintendents for the past couple of months, and some have been brewing longer. The district leaders decided it was time to take action after talking about different communications they’ve had with OPI staff.

“I think the letter was important for us just to make sure that Superintendent Arntzen had an understanding of what our concerns were,” Watson said. “I think we felt that it was important to put it in writing.”

Watson also said he appreciates the brief response Arntzen provided this week, and he believes it will take time for a full response: “Obviously, we raised some issues there that are going to warrant conversation and discussion, and I would welcome that.”

He said the superintendents do not blame OPI staff and believe they have been put in a “tough situation.” Many experienced employees have left, and some are serving in brand new positions.

Lipkind also said one important message is that the criticisms she and her colleagues have of Arntzen do not reflect their views of OPI staff.

“There are wonderful, dedicated employees at OPI, and there are new hires at OPI who have been doing a remarkable job,” Lipkind said. “So our condemnation of the state superintendent is not a condemnation of individuals at OPI who work tirelessly to support us, and many of whom are in short-staffed departments or are new and still learning their positions.

“We have a great appreciation for so many individuals that we have worked with over the years.”