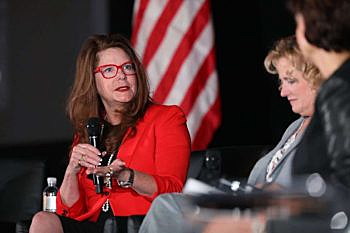 Praising the “true grit” of Superintendent of Public Instruction Elsie Arntzen, seven school trustees, 21 Republican lawmakers and more than 500 citizens of Montana signed a letter in support of the second-term Republican for championing parental choice and “eradicating waste” in an “entrenched bureaucracy.”

“Despite hate from the Left, you shouldered these burdens on behalf of the vast majority of parents from around Montana who oppose the school bureaucrats’ radical agenda,” said the Dec. 14 letter. “Montana has rarely seen a more effective advocate for parents and students.”

Trustees Mike Gehl of Missoula County Public Schools and Kalispell’s Jim Riley of District No. 89 Smith Valley were the lead signers of the letter and encouraged Arntzen to “keep up the good fight.” Some of the signers on the letter were duplicates, but Gehl in an email noted more people were throwing their support to Arntzen.

The letter identified Bobby Hauck, head coach of the University of Montana Grizzlies, as a signer; the Daily Montanan could not immediately reach Hauck on Wednesday morning to confirm he had signed. The letter also noted Justin Buls, a West Valley school board trustee, as a signer; Buls is a doctor who promoted content about the COVID-19 vaccine that was flagged as misinformation by Facebook and whose postings included syringes arranged in the shape of a swastika.

The letter from Gehl and Riley was in response to one sent last week by all eight AA district superintendents in Montana expressing no confidence in Arntzen’s leadership and outlining a series of problems with the Office of Public Instruction that are affecting the ability of teachers to do their jobs. Among the specific issues the letter from the AA leaders noted was a 90 percent turnover rate at the agency in Arntzen’s tenure, allowing OPI to “bleed to death.” The communication from the AA superintendents followed an open letter in November to the citizens of Montana from four county superintendents raising similar concerns.

Tuesday, the Montana Democrats pointed to the 90 percent turnover as well in a news release criticizing a decision the Office of Public Instruction was shutting down its educator licensing system from Dec. 31, 2021 to June 1, 2022, in advance of implementing a new system. The Democrats said teachers are worried that if they can’t renew their licenses because OPI isn’t processing applications, schools can’t pay them.

“Superintendent Arntzen continues to fail Montana’s teachers and educators,” said Sheila Hogan, executive director of the Montana Democratic Party, in a statement. “If teachers can’t get licensed, schools can’t pay their teachers, and districts are at risk of not meeting accreditation standards. This is not an issue of politics. This is an issue of incompetence.”

But the letter from Gehl and Riley offered a different take on the high turnover under Arntzen, re-elected in 2020 with 52 percent of the vote. It praised her for not only “tirelessly traveling the state, in all weather, to talk face to face with parent groups,” but for implemented changes that inevitably caused staff departures.

“Thank you for the heavy lifting of eradicating waste, fraud, and abuse from the tired and entrenched OPI bureaucracy,” the letter said. “Yes, reform in the name of the people who elected you has indeed caused turnover. The reform, however, was not only long overdue, but absolutely necessary. You have shown ‘true grit’ in refusing to be bullied by defenders of the failed status quo.”

In a meeting in Missoula about parent rights, Gehl told the audience he had taken his children out of public school, and he said the public schools lose money when parents do so. Arntzen was a lead speaker at the meeting, where nearly 100 participants talked about how to take over school boards.

“Montana educational institutions have been saddled for at least 20 years with entrenched unions and bureaucrats from the minority party,” said the letter this week. “The clear majority of Montanans — who elected you — now expect and demand change, not only in failed policies, but in failed staff. It’s called ‘accountability.’ And you delivered.”

The letter repeatedly praised Arntzen for the attention she pays to parents, and it asserted the AA superintendents had “gone rogue” in raising concerns in their letter and submitted it “with no authority” as “unelected bureaucrats.”

“We remind you and the news media that the superintendents are nothing more than unelected bureaucrats who do NOT represent the people of the state of Montana,” the letter said. “The people elected you twice, and we are delighted they did so.”

The letter praised her for specific actions, including “pushing back against unelected school officials and their wildly unpopular agenda,” and helping parents to resist “superintendent agendas of forced masking.”

“We thank you sincerely for the compassionate, professional and steadfast support you offer to local school boards and, most of all, parents and students,” the letter said. “We are so proud of the work you do.”

In a statement provided by OPI, Arntzen said she would continue to put students first, and she appreciated the letter of support from “a valued slice of Montana.”

“I humbly appreciate the confidence of all those that signed this letter or reached to me,” Arntzen said in the statement. “My staff at the agency are also grateful for the support as they have tirelessly emphasized students and families in their work.

“I reject the current continued negative narrative that seems to be politically driven. My statewide work is to restore hope by embracing and engaging the active role of parents and teachers in our children’s learning. I invite all Montana school leaders to proactively seek collaborative solutions.

“As the new year opens, I’ll be holding public listening sessions to engage all Montanans on the topic of learning and how to better serve our students.”

This story has been updated with comment from Superintendent Arntzen.