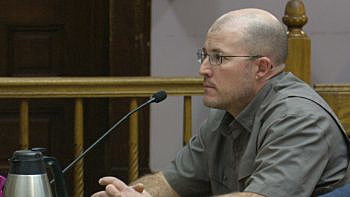 HELENA (KPAX) — After an emotional court hearing, District Judge Kathy Seeley Thursday accepted a plea deal arranged by Attorney General Austin Knudsen’s office for a man accused of threatening restaurant employees with a gun last year, after a dispute over wearing a face-mask.

Seeley expressed skepticism that defendant Rodney Smith couldn’t be found guilty of a harsher crime, but accepted a deal that had him plead guilty to disorderly conduct – while assault and weapons charged were dropped.

She said she had scant discretion on whether to accept the deal, when prosecutors from the attorney general’s office had agreed to it – even though restaurant employees who said they were assaulted strongly disagreed with Knudsen’s decisions on the case.

“I’ve informed the victims where we’re at, which is basically between a rock and a hard place,” she said. “They have one position; the prosecutor has decided on another.”

Seeley accepted the guilty plea and imposed the maximum fine of $100 for disorderly conduct, and $75 in court fees. Knudsen’s office had suggested a $50 fine.

But the judge did allow Hokkaido restaurant manager John Schneider and his wife, Jessie, a waitress on the night of the incident, to make lengthy statements in open court about their dissatisfaction with how Knudsen’s office had taken over the case and arranged a lenient plea deal.

Schneider fought with Smith at the restaurant during the Nov. 6, 2020, incident and said Smith threatened him with a holstered gun. He said the attorney general’s office didn’t even contact him until two weeks ago, after the plea deal had been arranged.

“I believe this plea deal would unfairly take away my rights as an innocent victim,” he said. “And when I voiced that concern and the trauma of this event, Mr. Oestreicher (the state general counsel who prosecuted the case) laughed at me on the phone.”

The judge also advised Smith to stay away from the restaurant and the employees who said they were assaulted.

“Your honor, I have absolutely no intention of going anywhere near that place of business or any of them for as long as I can possibly make do,” Smith replied.

Smith was arrested after the incident and charged with felony assault, misdemeanor assault and two counts of illegally carrying a concealed weapon.

The charges said Smith, his wife and one other man entered the restaurant after his wife had been told by Schneider to leave for refusing to wear a face-mask. They were seated without Schneider’s knowledge, and when he discovered them at a table, he told them to leave.

Smith then knocked water glasses off the table, pushed the waitress – Schneider’s wife – and got into an altercation with Schneider, the charges alleged. After Schneider released Smith from a headlock, Smith allegedly showed Schneider a gun he had in a holster and said he was going to “get” Schneider.

The Lewis and Clark County attorney’s office was handling the case, but in August, Knudsen’s office took the rare step of inserting itself into a local prosecution, ordering the county prosecutor to drop the two weapons charges.

It said those charges were no longer a crime, because the 2021 Legislature had passed a law relaxing restrictions on carrying a concealed weapon.

Lewis and Clark County Attorney Leo Gallagher refused, and said if Knudsen wanted to dictate how the case should be prosecuted, it should take it over entirely – which it did.

Last month, Oestreicher, Knudsen’s general counsel, agreed to a plea deal with Smith’s attorney, to drop all charges if Smith pleaded guilty to disorderly conduct and paid a $50 fine.

At this week’s hearing, Oestreicher also said that earlier details of the case had been misreported by the media, because it was the county attorney – not Knudsen’s office – who had first suggested dropping the weapons charges, because they were no longer crimes under current law.

Knudsen’s office produced a February 2021 email from Lewis and Clark County deputy prosecutor John Nesbitt, to Smith’s attorney, offering a plea deal and saying “given (the new law), the state would be agreeable to dismissing (the weapon counts).”

However, the plea deal attached to that email was considerably harsher than the one offered by Knudsen. It had Smith pleading guilty to criminal endangerment, a felony, and misdemeanor assault.

Nesbitt also was in the courtroom Thursday, and said he disagreed with every aspect of how Knudsen’s office had handled the case. Nesbitt later told MTN News that the offer to drop the weapons charges was just part of a discussion that any prosecutor may have with a defense attorney, while exploring what might be an acceptable to both sides in resolving the case.

Seeley also referenced the communication between the county prosecutor and Smith’s lawyer, questioning Oestreicher why he felt disorderly conduct was an adequate plea.

“You are telling me, as an officer of the court, you do not believe you could prove criminal endangerment or a misdemeanor assault in this case?” she asked.

“That is correct, your honor,” Oestreicher replied. “I think there is more to this story than what’s been reported in the press and the more to the story, your honor, is the lack of evidence.”

Smith has disputed Schneider’s version of events, saying the restaurant manager was the aggressor, and hostile toward his party, and that he didn’t threaten anyone with a gun.