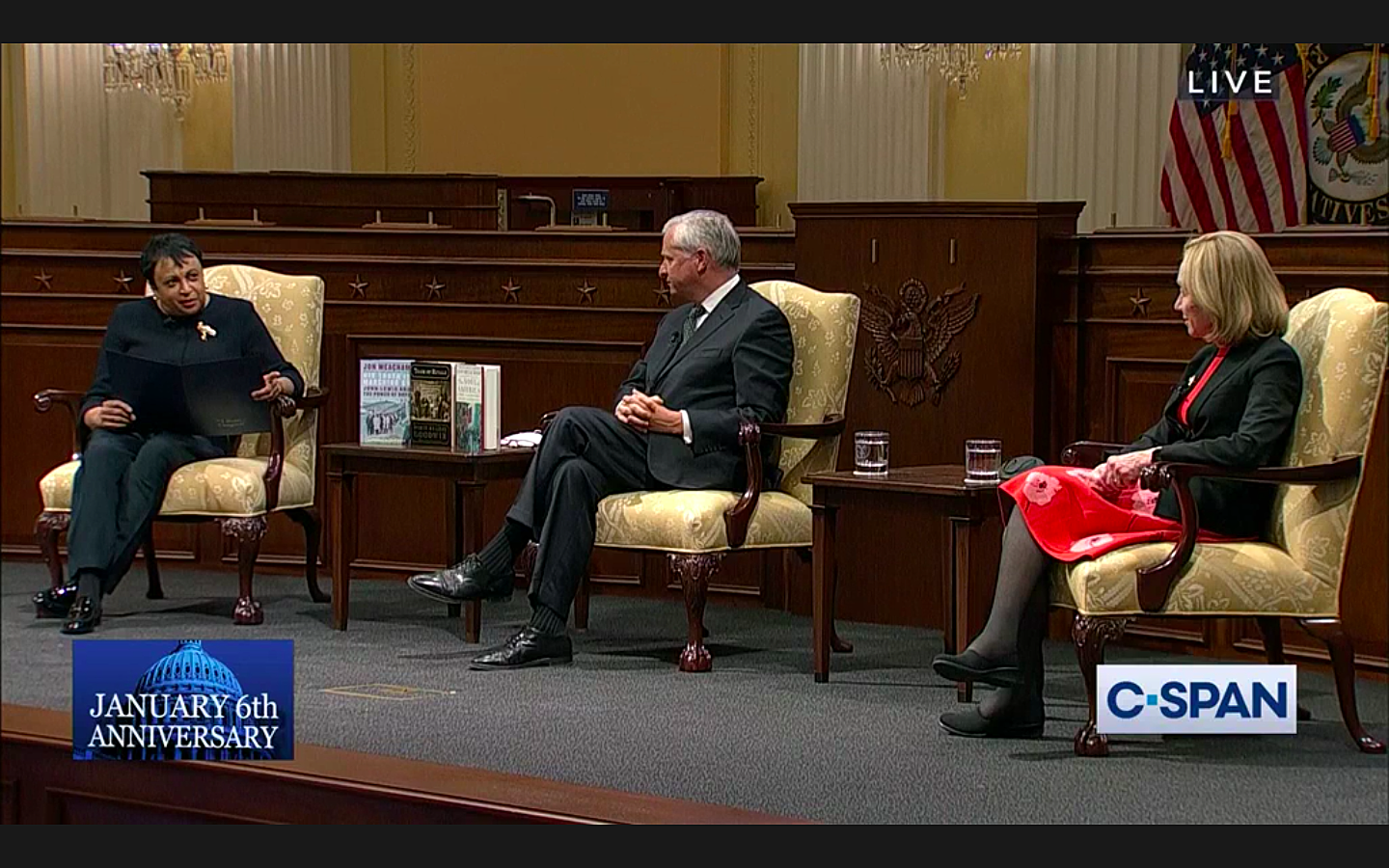 WASHINGTON (CN) — Drawing parallels between the state of U.S. politics today and the lead-up to the Civil War, historians commemorating the first anniversary of the Jan. 6 insurrection put the onus on voters and lawmakers to save American democracy from a dangerous trajectory.

“What you saw a year ago today was the worst instincts of both human nature and American politics, which was the will to power over the idea of equality and the rule of law, taking precedence,” said Jon Meacham, canon historian of the Washington National Cathedral, speaking at an event in Congress hosted by Speaker of the House Nancy Pelosi.

Meacham was invited to speak Thursday alongside a fellow Pulitzer Prize-winning author, the biographer Doris Kearns Goodwin, who traced the country’s roots over the centuries to deadly violence that broke out on the grounds of the U.S. Capitol one year ago. This record, she assured, shows that the harsh tone of a given political climate is not immutable.

“We know the revolution was won. We know George Washington became a president, not a military leader. We know that the Civil War ended with emancipation secured in the union restored. We know that the Allies won World War II. The people living through that time did not know that,” Goodwin said. “So, they were living with the same anxiety we are living through today of ‘How does this fragile democracy which is under attack today, resolve itself?’ And I guess the hope that that brings is that we’ve come to these really tough times before.”

But in a young country like the United States, Meacham emphasized, the passage of time makes all the difference.

“There was never a once upon a time in American history, and there’s not going to be a happily ever after. This is an unfolding job,” Meacham said, noting that questions of national identity and fights for power are struggles that unfold for decades.

Attempting to contextualize modern events like the Jan. 6 insurrection, Meacham noted the power to change politics by having contemporary political figures think about who they want to be remembered.

At the turn of the last century, America’s political parties and the public writ large were awash in tensions over slavery, the Supreme Court’s decision in Dred Scott v. Sanford, and rising class polarization. Last year, when the seat of the federal government was overrun, the mob was led by a faction of the Republican Party who insist without evidence that President Joe Biden’s win in the 2020 presidential election was illegitimate.

Goodwin said an investigation of the Jan. 6 attack being carried out by a House select committee offers an opportunity to record the facts of the insurrection for the rest of history.

“Knowing that we’ve got another chance now to retell the story of Jan. 6, and not just what happened, but what we need to have happen from now on, I think it’s giving us a chance again that we had last year we didn’t take advantage of, because somehow the alternative narrative got developed,” Goodwin said.

Where the country is headed after Jan. 6 is not certain, Meacham argued, but what is certain he said is that the insurrection did not mark the end to the country’s story. It gives a choice to lawmakers and voters alike to change their approach to politics.

“As the president says, it’s an inflection point. And it’s either a step on the way to the abyss, or it is a call to arms, figuratively, for citizens to engage and say, ‘No, we are more important. The work we are about is more important than the will and the whim of a single man, or a single party or a single interest,’ Meacham said.

“To lose this gift through selfishness and a greed for power through autocratic impulse would be beyond tragic. I don’t believe that’s going to happen, but I believe we’re as close to that as we have been since Sumter,” Meachem continued, referencing the battle that started the Civil War.