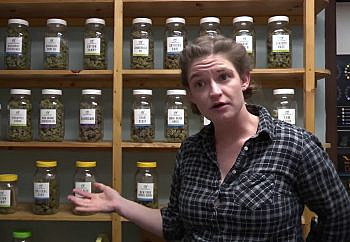 HELENA (KPAX) — Montana regulators and marijuana business owners agree that, despite some minor hiccups over the first month of recreational sales, the system is largely working.

On Wednesday, the Montana Legislature’s Economic Affairs Interim Committee held a hearing on how the launch of the adult-use marijuana system went.

“Despite having put together a new computer system, rolling the existing medical marijuana program into the recreational marijuana program – Jan. 1 came, and my people did their job,” said Brendan Beatty, director of the Montana Department of Revenue. “It worked.”

Business owners who testified Wednesday largely echoed that, with most saying the launch was as smooth as could be expected.

“I just want to thank everyone for their hard work, because we made it to Jan. 1 – and so far, so good,” said Evan Kajander, owner of Apogee Gardens, which operates in Livingston, Butte and Ravalli County.

The Department of Revenue said they had minor technical issues on the first day, with a few providers temporarily unable to make adult-use sales, but they were able to resolve it quickly. Most dispensaries reported very strong sales on Jan. 1, but that generally declined as the month wore on.

The state reported $22.6 million in marijuana sales in January, generating an estimated $2.96 million in tax revenue. Almost $12.9 million of the sales came from adult-use recreational marijuana.

Business owners said some dispensaries had issues matching their supply to demand, but the newly available option to sell marijuana wholesale had helped.

“It seems like the people that need flower are finding it,” said Kajander.

There have been more issues with the supply of manufactured products, including marijuana concentrates and edibles.

“So far, a lot of the recreational users have veered toward those two product lines,” said Erin Bolster, who owns Tamarack Cannabis in Flathead County.

The next big supply challenge could come in the summer, when large numbers of tourists will have access to adult-use sales for the first time.

“Based on previous years, we’re going to see over 50% of the total year’s tourism happen in the third quarter – that’s between 5 and 6 million new folks in a three-month period,” said Jerry Spurlock, owner of Missoula’s Firefly dispensary. “If shortages are going to happen, most likely that’s when it will. Based on the current canopy license and the time that we have to prepare for the influx, I think we’re going to be okay, though.”

The businesses also highlighted “pain points” that are still causing issues. They reported it’s taking longer to get a marijuana worker permit since Jan. 1, particularly because their employees are required to get fingerprinted for a background check.

“Two of our four local police departments actually stopped taking fingerprinting appointments because they couldn’t keep up with the staffing for it,” Bolster said. “That’s made hiring and onboarding employees suddenly very onerous – even though we have people that want to work, we just can’t get them badged.”

Kristan Barbour, administrator of the Department of Revenue’s Cannabis Control Division, said they recognize the permitting process is slow and they’re working to address that.

Businesses also expressed concern about regulators increasing fees for things like licensing and concentrate production. They said those costs are adding up and making it harder for them to compete with the black market.

“The key, in my opinion, to putting the stake in the heart of the black market is to have a competitive price point,” said Bolster. “If we can be close, then people will choose to come to the safe, legal market.”

Another big issue at Wednesday’s meeting was the law on canopy, or the allowed area where each licensee can grow marijuana.

House Bill 701, the main bill that established the current legal framework for the recreational marijuana system, established a tiered canopy system. Growers with a Tier 1 license can have up to 1,000 square feet of canopy, Tier 2 licenses allow up to 2,500 square feet, Tier 3 allows up to 5,000 square feet and so on.

HB 701 says a grower can only increase their license one tier at a time, and only if they show they are using the full amount of canopy they already have and are selling the marijuana they’re already producing. However, it provided an exemption through June 30, 2023, so small existing producers can increase up to Tier 5 in one step without meeting those other requirements.

The Department of Revenue says, because of how that exemption is worded, producers are still only allowed to increase their license tier once per year, when they submit their regular license renewal. However, industry advocates said that interpretation wouldn’t give them enough ability to grow their operations over the next year and a half.

They argue it goes against the intent of HB 701, which was to let existing marijuana providers scale up so they could compete with the new companies that will enter the market starting July 1, 2023.

“This committee needs to put forth a solution for this thing,” said Pepper Petersen of the Montana Cannabis Guild. “We need to immediately know what the interpretation of the law is.”

Beatty said he saw the language of the statute as clear, and he didn’t believe the department could change its policy without a change in the law.