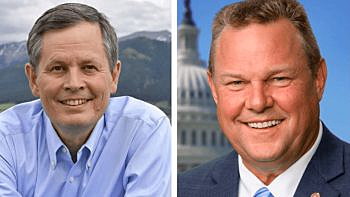 According to European-based media outlets, Russia launched its full-scale attack in the early-morning hours, bringing war back to Europe. The invasion threatens to upset the current world order, international experts said Thursday.

“I’m praying for the people of Ukraine and condemn Putin’s outrageous attack on their sovereignty and independence,” Daines said in a statement. “Putin is a thug and he has been empowered and emboldened by Biden’s disastrous withdrawal from Afghanistan and his approval of Russia’s Nord Stream 2 pipeline while killing America’s Keystone XL pipeline.”

Daines used the opportunity to call for an increase in the production of U.S. resources. Oil prices jumped to $105 a barrel Thursday after the invasion was launched and global stocks tumbled.

“The skyrocketing price of oil and resulting inflation are stark reminders of the importance of increasing, not decreasing, made in America energy,” Daines said. “I do not support sending American troops to Ukraine.”

Tester, chairman of the Senate Appropriations Subcommittee on Defense, also condemned the invasion and pledged U.S. support toward the defense of Ukraine and eastern Europe.

“Vladimir Putin single-handedly started an unprovoked war that makes the world less safe. I stand in solidarity with the people of Ukraine and with every freedom-loving democracy in condemning Russia’s illegal military actions. The United States will continue to support the security and stability of our NATO and European allies in the face of these acts of war,” Tester said.