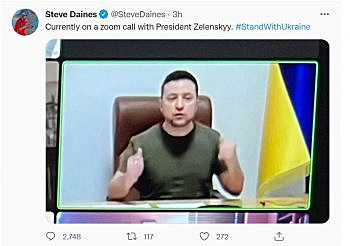 Republican U.S. Sens. Steve Daines of Montana and Marco Rubio of Florida are facing criticism Saturday for sharing photos on social media of Ukrainian President Volodymyr Zelensky in a secure location from a videoconference call with members of Congress.

Daines shared a screenshot of Zelensky at 7:53 a.m. Saturday as the Ukrainian president was urging members of Congress for more support against the Russian invasion, including military planes and an embargo on Russian oil.

According NBC News, members of Congress were told not to tweet or post pictures about the call while it was in progress out of concern for Zelensky’s safety. British newspaper The Times reported that Zelensky has survived three assassination attempts over the last week.

“The Ukrainian Ambassador very intentionally asked each of us on the zoom to NOT share anything on social media during the meeting to protect the security of President Zelenskyy. Appalling and reckless ignorance by two US Senators,” Democratic Rep. Dean Phillips of Minnesota wrote on Twitter.

The Daines tweet remains online and had more than 4,800 comments as of Saturday afternoon.

A Daines spokesperson defended the action, blaming the furor on partisan politics.

“This was a well reported call with over 250 people joining, and it was not a secure or classified briefing. The photo was shared before it was requested not to and well into the call, and it had no identifying information. We should be focusing on what’s important here and that’s supporting Ukraine. The only reason why anyone wants to make this an issue is partisan clickbait,” the spokesperson said.

Rubio’s office said his tweet did not cause any security concerns.

“There were over 160 members of Congress on a widely reported Zoom call. There was no identifying information of any kind. Anybody pretending this tweet is a security concern is a partisan seeking clicks,” a spokesperson for Rubio said, according to The Hill online newspaper.