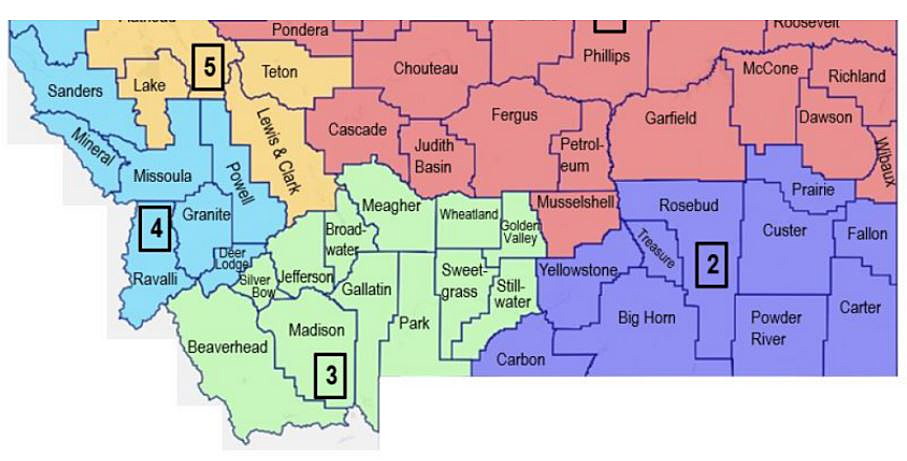 Some Montana voters will find themselves in new districts this year for the Montana Public Service Commission elections following an order Tuesday from a judge panel for the U.S. District Court in Montana.

Populations in the five districts have been cattywampus, and plaintiffs including former Secretary of State Bob Brown sued current Secretary of State Christi Jacobsen alleging the current map violates the one-person, one-vote rule in the U.S. Constitution. A deviation of less than 10 percent from a formula that calculates “ideal population” is “presumptively constitutional.”

Prior to their ruling, the three-judge panel asked the parties to submit their own proposed maps, and in their order, they agreed the “malapportioned” districts are unconstitutional, citing one with a deviation of roughly 24%. The judges also selected a map Jacobsen proposed, with a slight adjustment, as the one to be used in 2022.

However, the judges noted they didn’t want to make a choice on the maps and did so “reluctantly,” and they said their fix will be in place only until the Montana Legislature acts.

“This remedy is not permanent, however, and remains subject to the Montana Legislature’s power to draw and implement its own constitutional map,” the order said.

Although the Legislature has tried to make changes, they haven’t succeeded, and the current districts were drawn in 2003. Compared to the current districts, the new map puts Glacier, Pondera and Musselshell counties into District 1, and it puts Deer Lodge County into District 4. (The judges said they adopted the Secretary of State’s proposed Map 4 “almost in its entirety,” but they made the decision to move Pondera, the only change, to preserve the integrity of the Blackfeet Reservation.)

In a statement, lawyer Constance Van Kley praised the order as one for the good of democracy. Van Kley and Rylee Sommers-Flanagan of Upper Seven Law represented the plaintiffs along with Joel Krautter of the Netzer Law Office.

“The court has affirmed that all Montanans have an equal right to vote,” said Van Kley. “This ruling is a victory for Montana voters and for democratic principles.”

The order also reiterated that the job of drawing the maps belongs to the Legislature, and the panel was only stepping in because of the Legislature’s inaction.

“It bears repeating that this map remains in effect only in the absence of legislative action,” the order said. “The map does not interfere with the Governor or the Montana legislature’s ability to call a special session and implement a different map, nor does it prevent the Montana legislature from creating a different constitutional map during the 2023 legislative session.”

Republican lawmakers toyed with the idea of holding a special session, but they didn’t move forward because members could not agree to limit the session to only drawing maps. Republican Gov. Greg Gianforte also said he wouldn’t call a special session unless it was clear lawmakers had agreed on an agenda limited to a map.

In a statement Tuesday, House Speaker Wylie Galt said Republican leadership hadn’t read the full court order yet but were aware of its main points and appreciated its acknowledgement of legislative authority.

“The Legislature’s position all along has been that the court should have waited for the 2023 session to correct the issue before engaging in court-ordered redistricting,” Galt said. “While I disagree with that decision, I appreciate the court ordering a map that makes very few changes to prior legislative action and also for recognizing the Legislature’s ultimate authority to adjust Montana’s PSC districts.”

The order was signed by U.S. District Judge Donald Molloy, Ninth Circuit Court of Appeals Paul Watford, and Chief Judge Brian Morris, the last who wrote a concurring opinion. Morris said he would have adopted the plaintiff’s Map 1 as the preferred remedy for its compact and contiguous districts and slight population deviations.