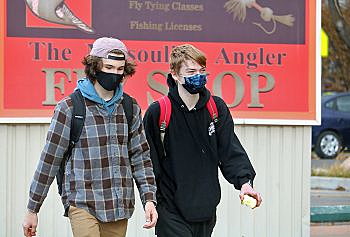 With the number of daily COVID-19 cases at a record high in Montana, the virus has emerged as the fourth leading cause of death in the state, and hospitals are becoming overwhelmed with patients.

Gov. Steve Bullock on Thursday acknowledged the virus’ sweeping spread and praised those counties that have implemented tighter restrictions in an effort to slow the rate of infection.

But while the state has implemented health restrictions of its own, including a mask requirement, they aren’t being followed by everyone, Bullock said. It remains a cause of frustration and one that’s likely to linger when governor-elect Greg Gianforte takes office in January.

Bullock said his administration has reached out to Gianforte’s team to offer assistance as the transition takes place. He was coy, however, on whether Gianforte has accepted the offer.

“Members of my coronavirus response team have offered assistance to the incoming administration,” Bullock said. “My staff has had initial discussions with the governor-elect’s transition team, and I think there’s been a constructive discussion.”

Gianforte named his 21-member coronavirus task force earlier this week, one that includes a refinery executive, the president of the Montana Chamber of Commerce and the executive director of Big Sky Resort.

It also includes a Catholic priest and a Ravalli County commissioner. One doctor and one nurse were named to the panel.

“Montana faces a public-health crisis and economic crisis as a result of Covid-19, which I trust the people of Montana to take seriously,” Gianforte said in a statement. “It remains my top priority to work together to protect the most vulnerable among us, while also safely and fully opening back up our economy.”

Nearly 500 people have died in Montana due to the virus, making it the state’s fourth leading cause of death.

“There’s no doubt we have a long winter ahead in Montana, and indeed across the nation,” Bullock said. “Nearly every state in the nation is facing uncontrollable spread. In Montana, we too are facing record hospitalizations and our death toll is on the rise.”

Bullock took aim at Congress and its failure to pass a new relief package. The last package was distributed in March. The election, he said, hasn’t changed the need.

“I have grave concerns about sending tens of thousands of Montanans into the employment line without any enhanced unemployment benefits,” Bullock said. “We haven’t seen another round of stimulus checks that could help families get by and stay home, particularly when we’re seeing so many instances of quarantine and isolation with skyrocketing cases.”