The old Sleepy Inn motel purchased by the city last year to serve as a non-congregant shelter during the pandemic has housed more than 260 individuals over the past year, including 21 people identified as high-risk individuals.

Across town, the Johnson Street shelter served more than 500 individuals over the past six months and provided more than 14,000 nights of stay. That shelter shut down for the season this week while the Sleepy Inn remains open.

On Wednesday, housing and homeless advocates said the future of both shelters will depend upon the course of the pandemic and the pace of vaccinations. But beyond the sheer number of people served and the related costs, advocates reported successes and lessons learned from the pandemic winter.

“The outdoor encampments were at the smallest levels our HOT teams have ever seen. It’s one of the big victories,” said Jesse Jager of the Poverello Center. “We have several (success) stories of being able to move people into housing because we had better access to them here (Johnson Street) over the winter period.”

Jager helped shut down the Johnson Street shelter this week. It opened last November when the city recognized the need for more shelter space that offered social distancing. The Poverello Center was under limited capacity due to the pandemic and health department guidelines.

Jager said the Johnson Street facility housed 509 unique individuals, with nightly figures ranging from 24 to 137 people. The figures grew higher as winter advanced and by the time it closed, the facility logged 14,577 nights of stay.

Despite the opening of the shelters and community efforts during the pandemic, Jager said the challenge of housing the homeless and at-risk population during winter won’t likely vanish, even if the pandemic fades.

“The biggest challenge we face is there is no housing,” he said. “We have dozens of people we’re working with right now who have vouchers in hand and could pay rent tomorrow but can’t get into a place to live. That’s just a reality of where we’re at in our community in terms of housing and affordable housing. We’re a band aide until that problem is solved.” 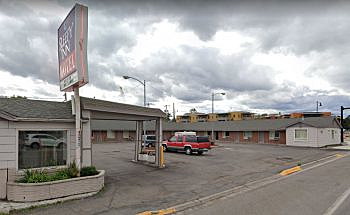 Across the city on West Broadway, the Sleepy Inn remains open as a non-congregant shelter. To stay at the facility, one must test positive for Covid, have a close contact who has tested positive, or be considered a high-risk individual.

While non of the categories have much to do with homelessness, Adrian Beck, director of the county’s disaster and emergency services, said housing those individuals was the city’s primary goal when it purchased the Sleepy Inn last April – and when the county agreed to run the shelter’s operations.

“We acknowledged early on that was largely the demographic we were talking about,” Beck said. “Ninety-eight percent of those who came through the shelter over the past year and some months have identified as being homeless.”

The other 2% included individuals traveling through Missoula who lacked the resources to secure their own shelter or quarantine space, Beck said.

In the numbers, around 262 occupants of the Sleepy Inn were Covid positive while 21 others were considered a close contact. Seven of those were moved into permanently supportive housing during their stay.

Funding provided by the city and local health department also helped hire a dedicated social worker to serve clients at the Sleepy Inn. It was the biggest success of all, Beck said.

“Not only was she transformative in getting these individuals residing at the shelter tied into all the different services, she was also central to getting those seven individuals housed into permanent housing,” Beck said.

“Any time you had individuals experiencing substance abuse issues, mental health issues, she was able to intervene and get them connected to appropriate resources to ensure they’re ability to stay at the non-congregant shelter.”

The city purchased the Sleepy Inn for $1.1 million to serve temporarily as a non-congregant shelter. Over the past year, Missoula County has incurred roughly $1.3 million in expenses running the shelter – a figure that includes around $345,000 in lease payments made to the city.

The county’s costs also include staffing, utilities and security. To date, Beck said, FEMA has reimbursed $930,000 in costs.

“We expect to be made whole by the time we get our last submission in for reimbursement,” Beck said. “The county is paying a lease for the utilization of the Sleepy Inn for our exclusive use of that facility as a non-congregant shelter.”

While the duration of the pandemic remains unknown and the future need of the two shelters remains unsettled, city officials praised the collaboration that made the shelters both possible and functional.

“We know how to do it. We know it works. We need to continue to do it,” said City Council member Mirtha Becerra. “We might not have the pandemic before us, but it has highlighted the continued need for shelter. My hope is all the entities that have been working together will continue to do that to continue to provide the much needed service of shelter to our unhoused neighbors.”