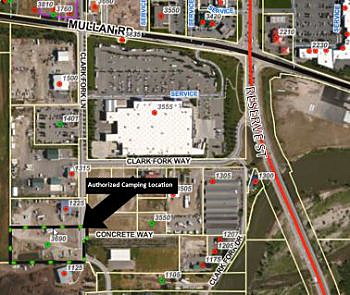 Missoula County on Thursday agreed to apply for a camping permit from the state to establish a sanctioned campground for the city’s hard-to-reach homeless population, while also keeping its feelers out for another site that could serve as a better option.

A handful of area residents and business owners are opposing city and county’s plan to establish the sanctioned campground on city property off Clark Fork Lane, one that’s intended to replace the illegal campground under the Reserve Street bridge.

The site off Clark Fork Lane was recommended by an incident team created to explore an array of options under Operation Shelter, as it’s become known. While the site may not be perfect, county officials said it’s among the only sites available for sanctioned camping.

“I’d like us to apply for this permit and see if we can find something better,” said Commissioner Josh Slotnick. “Right now, we don’t have private land to work with.”

The permit, required by the state, marks the first step in establishing the sanctioned campground, which would sit near the compost facility behind the super Walmart.

As proposed, the site would include around 50 camping pads, along with bathroom facilities, hand washing stations and trash collection. Security would include on-site personnel, a perimeter fence, security cameras and a controlled entry point.

“We might look at opening the front half at first and phasing it in,” said Casey Gannon, the county’s shelter project coordinator. “Understanding the need right now, we’ll most likely have to open up the entire site. We are looking at putting security cameras around the perimeter and some lighting as well.”

In an effort to address homelessness in Missoula and its many forms, the incident team in July recommended three separate strategies and locations across the city to accommodate legal camping, temporary shelter and transitional housing.

While the approach has a number of moving parts and will receive city and county funding through the American Rescue Plan, the legal camp site is poised to move forward first. But even so, the county admits that not all questions have been answered.

“What we do know is that the situation right now is untenable,” said Slotnick. “We have to do something. This is our first, best attempt. We will learn a lot, it will be imperfect, and we’ll adjust as we go.”

They also urged the county and its partners to seek another site, one they suggested was more suitable for housing the homeless population’s hardest to reach.

“I think Missoula needs to really rethink where it’s putting these people,” said one opponent, who owns property nearby. “This is a bad idea. It’s embarrassing we’re even considering this location.”

The county said site options are limited, though it would continue looking for other possibilities. In the end, the location would serve as a low-entry point for certain members of the homeless population who typically resist other, more traditional shelter options.

“We want a place for everyone that has security and water, and part of our hope is to make it so no one is living without any sanitation,” said Slotnick. “There needs to be a place for people who don’t want any of those (traditional services), and shouldn’t be camping where they’re not supposed to be. It’s better than what we have right now, which is a total free for all.”

Once the site is open, the city and county have said they’ll be able to enforce the no-trespassing rules now in place under Reserve Street. Camping there is already illegal, though it could now come with enforcement.

“We can’t tell people not to camp on public property unless we give them an option of somewhere else to go, and that’s exactly what we’re doing,” said Commissioner Dave Strohmaier. “Until such a time as we can provide an option, we can’t do that (enforcement).”

Operation Shelter: City and County of Missoula unveil trio of options for homeless