CHESTER (KPAX) — First responders and volunteers in Liberty County and surrounding counties quickly came together after an Amtrak train derailed just outside of Joplin on Saturday, leaving three people dead and dozens injured.

A spokesperson for BNSF said the section of track where the derailment happened was last inspected on Sept. 23. The spokesperson also said the track can be repaired in as little as 14 hours after the National Transportation Safety Board (NTSB) completes its investigation, which usually takes a “single-digit number of days.”

All but five of the injured have been released from the hospital and are continuing to head west as the train was bound for Seattle. Many passengers were bused to Shelby where they stayed in hotels.

Liberty County Disaster & Emergency Services Coordinator Sarah Robbin said it was a nearly flawless response from first responders, and that the response from them and the community was tremendous.

“We want to thank all our responding agencies, our surrounding counties including Toole, Hill, Pondera, Glacier, Blaine, Chouteau, Cascade and Gallatin as well as Great Falls Fire and Rescue, the Montana Highway and Border Patrol units, and our regional medical centers and critical care hospitals. However, there is an ongoing investigation with the NSF, Amtrak and NTSB. We ask that people stay clear of the area until the investigation is complete,” Robbin said. 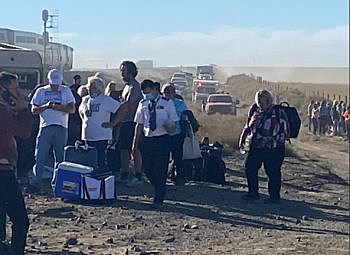 Gov. Greg Gianforte made the trip to Liberty County as well to give an update and to offer thanks to first responders who helped save lives, all of whom were volunteers from various communities on and near the Hi-Line.

“In the face of this tragedy, Montanans did what they do best. Neighbors were helping neighbors and strangers,” Gianforte said. “This was an ‘all of the Hi-Line effort.'”

Gianforte added that all passengers are accounted for and added there are still five patients in stable condition at Benefis Health System in Great Falls.

Several agencies are working together in the investigation to find the cause of the derailment.

The names of the people who died have not yet been released.