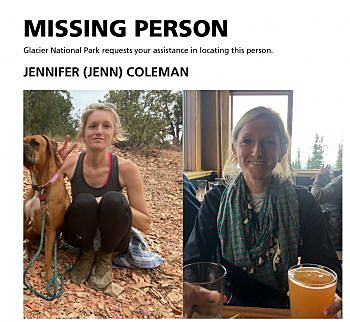 Searchers in Glacier National Park on Sunday found the body of a missing Richmond, Virginia woman in a steep and rocky area near the Continental Divide.

Jennifer Coleman was reported missing on Wednesday, September 1, and her car was located later that day in the Logan Pass parking lot.

In a written statement Sunday night, park officials said Coleman’s body will be removed when weather conditions permit. Air operations were halted earlier that afternoon because of  high winds in the incident area. Coleman’s family has been notified.

The search in Glacier started Wednesday and continued through Sunday, with the search area and number of search and rescue personnel increasing as the days passed. As many as 50 people had joined the search by Sunday.

Cause of death is currently under investigation.

Glacier Park officials thanked the public for responding to requests for help in locating the woman.