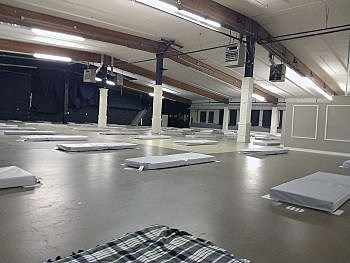 Additional funding directed to the Poverello Center for the operation and hiring at the winter shelter is paying off, shelter officials said this week.

The Missoula City Council last week directed an additional $125,000 to the winter shelter to help the Poverello recruit and retain the staff needed to operate the facility. This week, Missoula County followed, increasing its allocation to the shelter by the same amount.

“That increase was to help the Pov address some of the recruitment and retention issues around getting staff for the winter shelter, as well as some of the other positions needed to support that program,” said Chris Lounsbury, the county’s CAO.

The winter shelter opened earlier this month and, at the time, shelter officials expressed concern over the challenges it faced in recruiting the staff needed to operate the facility.

The increase in funding from the city and county have enabled the Poverello to offer $500 in monthly bonuses to all staff at the end of each month, as well as an end-of-season bonus of $1,500.

Jesse Jaeger, the shelter’s outreach coordinator, said the effort is paying off.

“Hiring is looking good. The extra money for hiring has been really helpful,” he said. “Currently, we’re sleeping around 90 people a night at the winter shelter, which is a higher utilization earlier than last year. It’s meeting a really critical need in the community.”

The winter shelter became necessary last year when the Poverello ran into limitations on the number of people it could house each night due to CDC guidelines and the pandemic. Those limitations remain in place, Jaeger said

The winter shelter on Johnson Street can sleep 150 people a night, nearly double what the Poverello can under current restrictions.

“The Pov’s main shelter on Broadway continues to be limited to about 88 individuals a night due to CDC social distancing guidance for congregant shelters like that,” Jaeger said. “That, along with the winter shelter, brings our total capacity to around 238 people.”