A resolution adopted by the city and county of Missoula last year to create a just and equitable community is beginning to hit the ground as the push for equality makes its way into local councils, boards and commissions.

The Justice, Equity, Diversity and Inclusion effort this spring will also include a final report on dismantling “systems of privilege and oppression,” along with a new city position which will be filled in the coming weeks.

It may also see non-binary bathrooms become the norm rather than the exception in future city projects, according to Ashley Brittner Wells, the city’s new engagement specialist.

“We did a lot of outreach about the proposed community center and Currents and talked to a lot of folks – the communities that have trans and non-binary members,” said Wells. “I advocate and appreciate there being bathrooms accessible for all.”

Wells presented the city’s JEDI philosophy, its purpose and next steps to members of the Community Forum this week, where the issue of non-binary bathrooms came up in a question.

While the foundational elements of the JEDI resolution fall into place, those behind the effort are looking at other ways to break down barriers. Wells said non-binary bathrooms are among them, as they don’t require an individual to identify with a specific gender.

“I think non-binary bathrooms serve the purpose of making folks who do belong to the trans and non-binary communities, or gender-non-conforming communities, feel comfortable in that they have a sense of belonging in a space offered to all other folks,” said Wells. “Something as simple as using a bathroom shouldn’t be a stressor to anyone.”

City Council member Gwen Jones said the issue of non-binary bathrooms has come up before the council in recent months, especially as it looks to relocate future city operations.

The city is planning to consolidate public works and other services at a new facility on Scott Street. In the coming years, both the city and county could also renovate and occupy the vacant downtown federal building, where they’d combine an array of public services.

“We have an opportunity to do it and do it right,” said Jones. “In specific, we discussed bathrooms and other things. I’m not sure we’d remodel City Hall because we’d be pouring money down a black hole, but the federal building is on the horizon. We’re on it.” 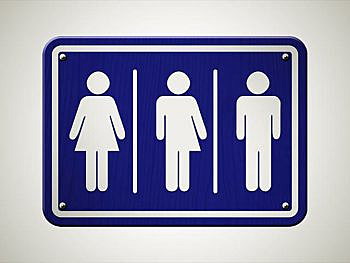 The city and county adopted the JEDI resolution on Sept. 3 and stated a mutual effort to work toward equality for all. Among other things, the resolution directed local government to review its polices and make revisions where necessary.

The resolution also attempts to strike at a number of concerns that cover perceived racial or group inequity, economic inequity, equal opportunity and other issues. It could encompass government decisions on housing, poverty and homelessness, among other social concerns.

“There’s a lot of different, awesome and tangible examples of JEDI work happening in the community, including the Affordable Housing Trust Fund, the homeless coordination system, and programs through parks and recreation,” said Wells. “It’s a very exciting time at the City of Missoula.”

As the JEDI program gains its footing, Wells said it already has aligned efforts with local organizations including the county, the All Nations Health Center, the University of Montana and Missoula County Public Schools.

“Having that group of partners has helped inform the ways we can work together to achieve those goals,” said Wells. “JEDI work is about benefiting all and making sure everyone has a fair shot.”