HELENA (KPAX) – Stuart Long, or Father Stu as he was better known, had a profound impact on the Helena community. Now, his story will be shared with a much larger audience thanks to Sony Pictures.

A special red-carpet premiere of “Father Stu” starring Mark Wahlberg and written/directed by Rosalind Ross was held at the Helena Cinemark on Monday. It was an enthusiastic event for people who knew Fr. Stu and helped with the production.

Wahlberg and Ross both recognized this will very likely be one of the toughest crowds to view the film given how beloved Fr. Stu was in the community.

“There’s a lot of pressure because the expectations are high and people hold Stu in the highest regard, as they should,” Wahlberg told MTN. “I understood that going in and the respect and sensitivity in making this movie and getting this right.”

“Wow, pressure’s on,” said Ross at the premiere. “This is probably the toughest crowd we’ll face and I’m up for the challenge. I’m just excited to hear what people think.”

At the premiere, Tolleson said he thinks his friend would have gotten quite the kick out of knowing a film was being made about him.

“Yeah, it’s unbelievable. It’s pretty funny, I don’t even know what to say. It’s hysterical really, but it’s great. It’s great because Stu was a great guy and it’s great that the world gets to hear about it. It will change lives I think, it really will,” Tolleson told MTN.

Born in Seatle, but raised in Helena, Long was a prominent athlete, playing football for both the Capital High School Bruins and the Carroll College Saints. Long also won the 1985 Golden Gloves heavyweight title for Montana and was runner-up in 1986.

After a jaw injury from prizefighting, Long made the decision to move to Los Angeles to take a shot at becoming a movie star, although he never did anything more than commercials and bit parts.

A near-fatal motorcycle accident in L.A. prompted him to explore his religious faith which ultimately lead to his baptism as a Roman Catholic so that he could marry his girlfriend at the time, during which he felt the calling to become a priest.

“The conversion itself is almost completely unbelievable unless you are someone of faith,” said Ross. “Having something that initiated such a profound change in him, it’s something I became very curious to learn more about and understand.”

While in seminary, Long was diagnosed with an extremely rare autoimmune disease that mimics the symptoms of ALS, Lou Gehrig’s Disease. The disease ultimately claimed his life, but despite the hardship, he continued his ministry up until his disease claimed his life.

Wahlberg said Fr. Stu’s story is a message that we can all improve and work towards being better people and help where we can. 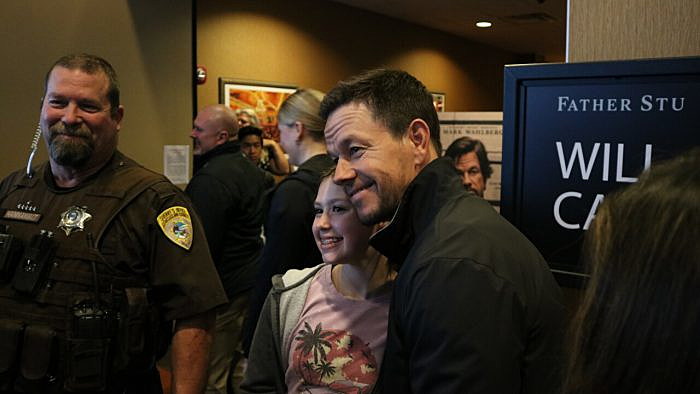 “Hopefully people just take away the fact that if they’re in a position to just do a little bit more and always try to be a little bit better,” Wahlberg explained. “I think Stu wanted to entertain people, wanted to make people laugh. Obviously, it’s a very emotional story, but ultimately it’s an emotional story that inspires people to be the best version of themselves and his work will continue on long after the film comes.”

Bill Long, Stu’s father, played a huge role in the priest’s life, although Bill is quick to say he was just doing what he could.

Bill was a constant presence toward the end of Stu’s life, helping care for him and aiding Stu with his ministry.

He’s portrayed by Mel Gibson in the film, and the real Bill Long is still getting a kick out of it.

“It’s unbelievable why somebody like Mel would take an insignificant role like me,” said Long, humble at the red-carpet event.

Long added that he hopes his son’s story can continue to help others.