Missoula County to consider ‘I Voted’ stickers in Salish language

The Missoula County Elections Office this week said it would consider printing “I voted” stickers in the Salish language for members of the Confederated Salish and Kootenai Tribes, marking the county’s latest step to further recognize its tribal partners.

Missoula County Commissioner Dave Strohmaier encouraged county elections leaders to consider adopting the practice, which is already used in Big Horn County in recognition of the Crow and Cheyenne tribes.

“The Big Horn County elections administrator worked with the tribes to help cover that,” said Missoula County election Supervisor Bradly Seaman. “As we’re reaching out to work on a collaboration with the Confederated tribes, that’s a great opportunity and something I think we can take on.”

Over the last two years, both the city and county of Missoula have taken steps to acknowledge the region’s tribal history and the people that helped make it. 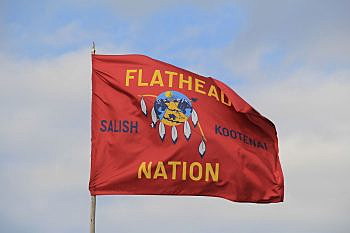 Among the efforts, Missoula County in 2020 added the CSKT tribal flag to the courthouse meeting room and recognized Native American artist Quick to See. In 2018 it also renamed the meeting room as the Sophie Moiese room, a Salish cultural leader from 1864 to 1860.

More recently, both the city and county have added a land acknowledgment to most public meetings, recognizing the ancestral importance of the Missoula Valley region. The also renamed the Mullan area as Sx͏ʷtpqyen, the historic Salish place name for that part of the city.

Last year, the county also pushed to rename the Higgins Avenue bridge over the Clark Fork River as the Bear Tracks Bridge. The name was selected to remember Sx͏ʷuytis Smx̣e, a tribal leader known as Grizzly Bear Tracks who signed both the Hellgate Treaty and Judith River Treaty in 1855.

Strohmaier encouraged the elections office to continue the trend by recognizing the region’s Salish voters. Seaman agreed and said the voting office would take on the project.

“It’s definitely something we can bring forward four our Salish voters here who are on tribal lands,” said Seaman. “That engagement is something we take really strongly.”